Game of Thrones: The Complete Collection on 4K 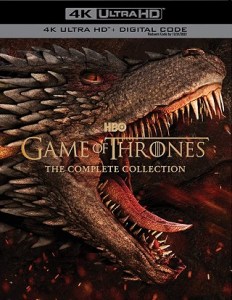 The hit TV series “Game of Thrones: The Complete Collection” will finally be coming to 4K UHD Blu-ray on November 3rd, via HBO, according to retailers. The series, based on George R.R. Martin‘s book series, ran from 2011 through 2019. It had previously received 4K releases of the first and final seasons of the show, but now it will receive a box set release on the 4K UHD Blu-ray format, spanning across 33 discs, containing all eight seasons. The 4K box set will not include the Blu-ray Disc versions of the seasons, as previously the case, but will come with a digital code (copy) of all eight seasons. The tech specs for the 33-disc set include a 2160p video presentation in the 1.78:1 aspect ratio with HDR10 and Dolby Vision forms of High Dynamic Range along with Dolby Atmos sound. You can now find the 4K UHD Blu-ray set available for preorder over at Amazon as well as at online retailer Deep Discount, and at Best Buy. Speaking of which,  there will also be an exclusive 4K UHD Blu-ray SteelBook set available over at retailer Best Buy (pictured below), which is now available for preorder. 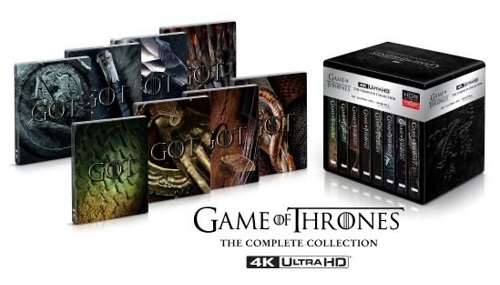 Some brief details regarding the bonus materials for both versions of the 4K box set can be found listed below.