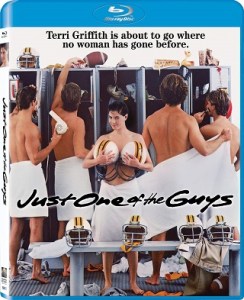 Terri (Joyce Hyser, TV’s “L.A. Law”) blames sexism when her journalism teacher refuses to enter her article in a competition to win a summer internship at the local newspaper. With the help of her kid brother, Buddy (Billy Jacoby), she masquerades as a guy at a rival school and enters the contest there. During her charade, “Terry the Boy” tangles with a vicious bully, Greg (William Zabka, The Karate Kid), and fends off an amorous classmate, Sandy (Sherilyn Fenn, TV’s “Twin Peaks”). But when she falls for a handsome loner, Rick (Clayton Rohner, TV’s “Murder One”), our hero/heroine must find a way to convince him that she’s not JUST ONE OF THE GUYS.