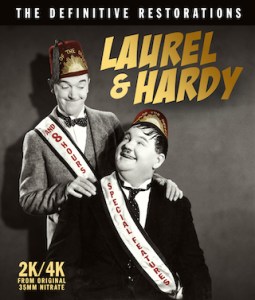 STAN AND OLLIE LOOK AND SOUND BETTER THAN EVER!

New 2K and 4K digital restorations from original 35mm nitrate, Laurel and Hardy’s classic comedies are here in the best quality since their first release! Two features and 17 shorts, including the legendary pie-fight silent film The Battle of the Century, making its video debut and nearly complete for the first time in over 90 years!

Restorations by Jeff Joseph/SabuCat in conjunction with the UCLA Film & Television Archive and the Library of Congress. Using careful photochemical and digital techniques, these classic films are restored to pristine condition. In these stunning new transfers, they look and sound as beautiful as they did when they were first released.