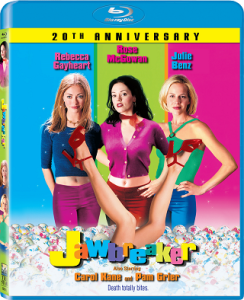 IN CELEBRATION OF ITS 20TH ANNIVERSARY

First, I guess you need to know something about them: “The beautiful ones.” “The flawless four.” Everyone wanted to be them. You know them. They went to your school, too. First there’s Courtney “Satan-in-Heels” Shayne (Rose McGowan) and her pawn, the dense but dangerous Marcie Fox (Julie Benz), a legend in her own little mind. Then there’s angelic Julie Freedman (Rebecca Gayheart), doomed to be popular because of her pretty face. And lastly, the teen dream herself, Elizabeth Purr. When an ordinary kidnapping prank leaves the future prom queen dead (accidentally gagged with a jawbreaker), a deadly sweet prank leads to cover-up makeover in this edgy and unpredictable comedy. But there will be no mercy as prom night arrives, bringing this spirited tale to its cruel tiara-dropping conclusion.