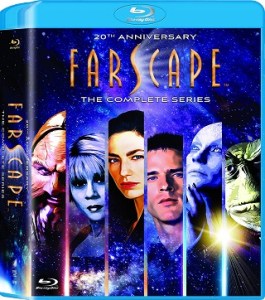 INCLUDES ALL 88 EPISODES, OVER 15 HOURS OF ARCHIVAL
SPECIAL FEATURES, PLUS THE FINALE MINISERIES,
FARSCAPE: THE PEACEKEEPER WARS!

SYNOPSIS
Astronaut John Crichton assumes he’ll be home in time for dinner. But a freak accident during an experimental space mission catapults him across a thousand galaxies to an alien battlefield. Suddenly, he’s trapped among alien creatures wielding deadly technology – a battle that 20th century sci-fi pop culture never prepared him for. Hunted by a merciless military race, Crichton begins his unforgettable quest for home. Celebrate the 20th anniversary of this groundbreaking, epic sci-fi adventure that has become a fan favorite around the world.