47 Meters Down Uncaged on Blu-ray November 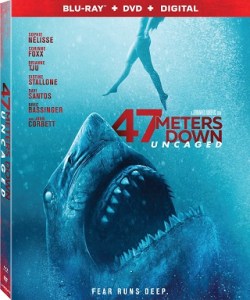 The 2019 sequel “47 Meters Down: Uncaged” is officially coming to Blu-ray Disc on November 12th via Lionsgate. The film, directed by Johannes Roberts, stars Sophie Nélisse, Corinne Foxx, Brianne Tju, Sistine Rose Stallone, Brec Bassinger, and John Corbett. Tech specs for the Blu-ray have not yet been detailed. The release will come in the form of a “combo pack” with a DVD counterpart and digital code (copy) of the film. Bonus materials also have not yet been detailed. There’s currently no preorder listing yet over at Amazon but that should change soon. There is a placeholder page over at retailer Best Buy but it’s not yet functional (only listed as “coming soon”). Lastly, stay tuned for further updates once I get my hands on a press release and an Amazon preorder listing goes up.