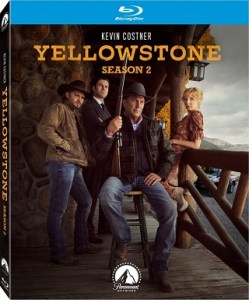 The TV series “Yellowstone: Season 2“ is coming to Blu-ray Disc on November 5th via Paramount. The show, as seen on Paramount Network, stars Kevin Costner, Luke Grimes, Kelly Reilly, Wes Bentley, Cole Hauser, Kelsey Asbille, and Danny Huston. Tech specs for the Blu-ray should be identical to the previous season, 1080p HD video in the 2.00:1 aspect ratio and DTS-HD 5.1 Master Audio – although I’ve yet to confirm this. The release on Blu-ray is now available for pre-order over at Amazon. Bonus materials set to be included on the release are listed below.

“The Godfather on a ranch”—Los Angeles Times

Blu-ray™ & DVD Arrive November 5, 2019 with Over 45 Minutes of Never-Before-Seen Content, Including a Behind-the-Scenes Making Of Featurette with Kevin Costner & Deleted Scenes

HOLLYWOOD, Calif. – Kevin Costner returns to the ranch as the Dutton family fights for its survival in “YELLOWSTONE” Season 2, arriving on Blu-ray and DVD November 5, 2019 from Paramount Home Entertainment.

From writer/director Taylor Sheridan, ”YELLOWSTONE” is an engrossing family drama that follows the epic story of a multi-generational family that controls the largest contiguous ranch in the U.S.  In Season 2, John (Kevin Costner), Kayce (Luke Grimes) and the rest of the clan battle constant encroachment from ruthless enemies on all sides.

A huge hit with viewers, “YELLOWSTONE” is the most-watched original cable entertainment telecast this summer.  The second season debut episode drew 5M+ viewers in Live+3, surpassing the series premiere by 6%.  The show has already been renewed for a third season on Paramount Network.

The “YELLOWSTONE” Season 2 three-disc Blu-ray and four-disc DVD sets include all 10 hour-long episodes from the second season, plus over three hours of additional content, including over 45 minutes of exclusive, never-before-seen footage.  Among the exclusive content is an in-depth, 30-minute exploration of the second season, detailing the show’s heightened drama and rising stakes through interviews with Kevin Costner and other cast members.  The disc collections also include exclusive deleted scenes and a look at the show’s stunts, along with “Behind the Story” and “Stories from the Bunkhouse” segments for each episode, and more.