Doom: Annihilation on Blu-ray in October 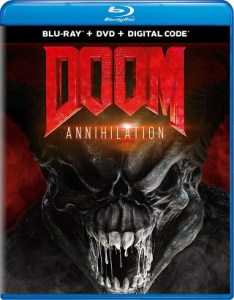 The 2019 direct-to-video film “DOOM: Annihilation“ is coming to Blu-ray Disc on October 1st via Universal. This film, based on the video game series (“DOOM“), was both written and directed by Tony Giglio. The cast for this includes Amy Manson, Louis Mandylor, Nina Bergman, Dominic Mafham, Luke Allen-Gale, Amer Chadha-Patel, and Kate Nichols. Tech specs for the release have not yet been detailed, nor have bonus materials, but stay tuned for a later update on all of that. It is known from the artwork (pictured above) that the release will come in the form of a “combo pack” with a DVD and digital code (digital copy) of the film included. You can find the Blu-ray is now available for pre-order over at Amazon. The trailer for this upcoming film can be found HERE.