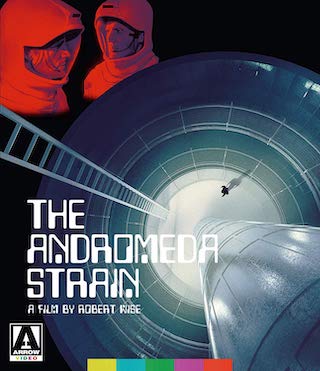 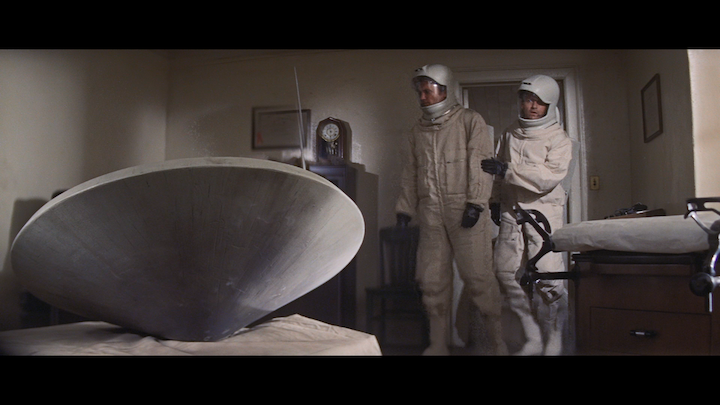 “The Andromeda Strain” was a 1971 Sci-Fi (Science Fiction) / Thriller directed by Robert Wise. Wise had a long career as a filmmaker and was best known for directing films like “The Body Snatcher“ (1945), “The Day The Earth Stood Still” (1951), “Somebody Up There Likes Me” (1956), “West Side Story” (1961), “The Sound of Music” (1965), “The Sand Pebbles” (1966), and “Star Trek: The Motion Picture” (1979). Two out of those seven films I mentioned above would fall under the classification of Science Fiction (Sci-Fi) as their genre. So, it’s obvious the man had some success and even admits to having fun with that genre as well as with musicals, dramas, and even action films.

This movie was based on the novel (of the very same title) which was written by Michael Crichton. The screenplay was adapted by Nelson Gidding. Gidding is also known for writing the screenplays to films such as “I Want to Live!” (1958), “Odds Against Tomorrow” (1959), “The Haunting” (1963), and “The Hindenburg” (1975) – three of which films were also directed by Robert Wise.

The story here involves a crashed U.S. satellite (codenamed “Scoop”) that lands in the extremely small town of Piedmont, New Mexico. At first, a recovery team of military personnel with scientific backgrounds are sent in to inspect the crash site but that doesn’t go as expected. They find the almost entire town to be dead from what would appear to have been an airborne contagion of sorts, dropping almost everyone dead in their tracks (so-to-speak). Eventually, a military aircraft is called in to further inspect the area and send back video to higher-ups at the White House that report back to the President of the United States.

After close inspection of what has occurred in the town of Piedmont, a directive has been put forth to assemble a group of four researchers coming from scientific and medical backgrounds. These four people are comprised of team leader “Dr. Jeremy Stone” (Arthur Hill), team surgeon “Dr. Mark Hall” (James Olson), “Dr. Charles Dutton” (David Wayne), and “Dr. Ruth Leavitt” (Kate Reid). The four are sent to a top secret state of the art underground lab facility (codenamed “Wildfire”) where they have to undergo some extreme precautions before entering.

Once the four researchers have arrived at the facility it’s up to our group to investigate the crashed satellite (for the alien lifeform or living organism) and to try and treat the only survivors from the town. While all that’s going on, it has also been discussed of bombing the town by advisors to the President, to contain the outbreak and prevent it from spreading. Will they bomb the town or can the group of researchers come to find a way to stop this? You’ll have to watch the film (or have read the book) to find out.

Looking back on it, “The Andromeda Strain” was a really good film adaptation of the novel written by Michael Crichton and still proves to be just as intriguing and also disturbing to this very day. There are some really great performances here from the four primary cast members, some excellent cinematography, and especially great direction from a very well-accredited director for his time (Robert Wise). The film was nominated for two Oscars (Academy Awards) for best art direction/set decoration and for best film editing. The movie was reported to have been shot with a budget of around 6.5 million (according to Wikipedia) and ending up grossing 12.4 million overall at the box office. That’s not too bad of a return for the studio [Universal] here on this film. 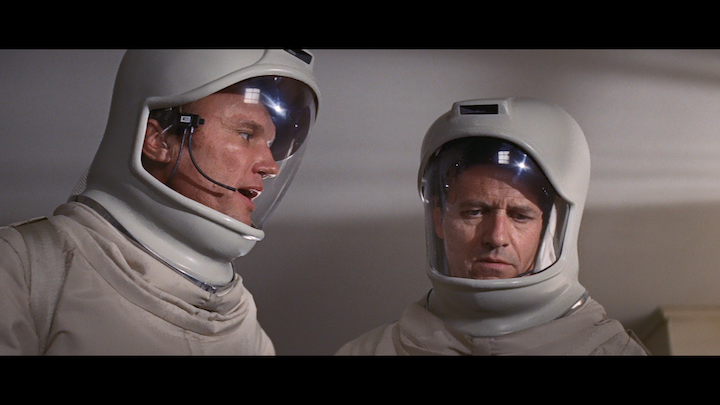 “The Andromeda Strain” on its “Special Edition” Blu-ray is presented in the 2.35:1 aspect ratio, just as it was shown theatrically. The movie was shot on 35mm film using Panavision cameras with Panavision anamorphic lenses and was presented in the Technicolor process, according to the film’s opening credits and IDMb. This has received a new 4K restoration by the folks at Arrow Video which was taken from a new 4K scan of the original camera negative.

The first thing you’re going to notice about this visually is the tremendous amount of film grain that has been left intact. That’s, in my opinion, a great thing to see: especially in a restoration. There’s a really nice amount of detail to be found here and much of that is thanks to the style of cinematography used here where characters are in and out of the foreground (as shown in screenshots) often during closeups shared between two actors. The black level is solid, flesh tones appear accurate, and the color timing seems to be correct. This has received a restoration (as mentioned), so you’ll notice that a lot of the visual imperfections like dirt, debris, hairs, scratches, and such have mostly been cleaned up.

That said about things being clean, for the most part, there is a slight bit of a rough feel here at a few times in the movie and that’s thanks to the amount of film grain that was on the original negative. For almost all of the film, it’s clean and sharp but there are a few occasional scenes where there’s a bit more film grain than usual and things aren’t quite as sharp. First off, it’s not really at all bothersome and secondly, I’m not sure if it was actually just the visual intent of the filmmakers: namely the director and director of photography (with their style of cinematography).

Overall, the high definition visual presentation found on this Blu-ray from the new 4K restoration of “The Andromeda Strain” is worthy of an impressive 4.5 rating for video quality. The folks at Arrow Video have done a very nice job on this 1971 Sci-Fi / Thriller classic film. 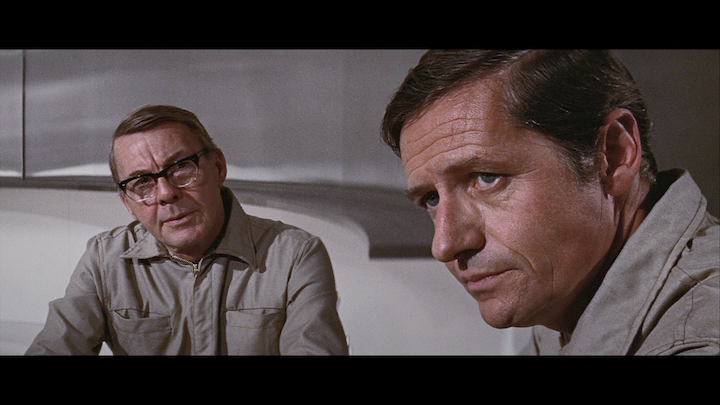 Audio here is presented in Uncompressed Linear PCM 1.0 Mono. It is no surprise that this Blu-ray gets a Mono track and that it’s in a traditional single speaker (center channel) style, considering that it was Mono even during its original theatrical run – according to IMDb. Some 70mm blowups received a 6-track audio presentation, however, it doesn’t seem they [Arrow Video] were able to get their hands on that print.

The packaging [back of the box] claims that this movie has received a new restoration of the audio. That being said, this comes across pretty intense for Mono at times and that’s especially thanks to its original score (music). Dialogue is delivered very distinctly throughout the entire motion picture and that’s very important as this science fiction film relies on a lot of dramatic exchanges of dialogue between the characters. The sound effects here sound pretty good for an early 1970s film that is just in Mono.

It’s pretty easy to get pulled into the film here thanks to an all-around solid and at times impressive audio presentation. All and all, it’s a lossless 1.0 (Mono) mix that has points where it proves to be a bit more than just solid, earning it a 4.25 rating for audio quality. There’s just not enough really intense action in this primarily dramatic Sci-Fi Thriller for me to be impressed enough to really rate it any higher. That’s not to say that it doesn’t sound really good, because it actually sounds well beyond solid in its audio presentation. 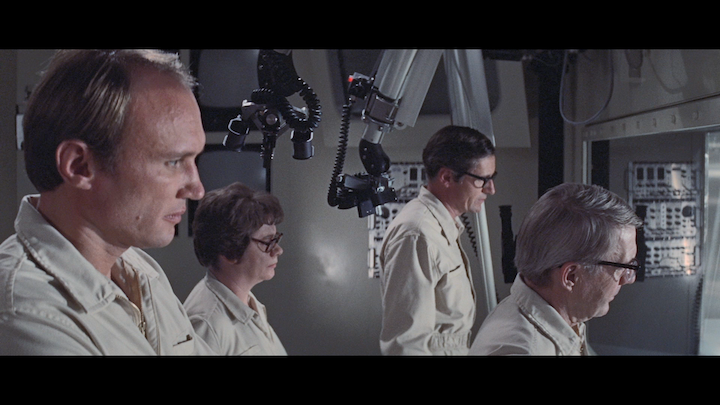 Bonus materials on this release are presented in both HD (high definition) and SD (standard definition) video with Dolby Digital 2.0 Stereo sound – unless otherwise noted below. They include the following:

Overall the bonus materials here a pretty good. You get nearly an hour and a half of featurettes that include a new fan-appreciation, archival 2001 DVD featurettes, as well as audio commentary, an image gallery, the “Cinescript” gallery, and there’s even the actual 192-page “Cinescript” itself in PDF format on the BD-ROM. It’s a pretty solid set of extras. 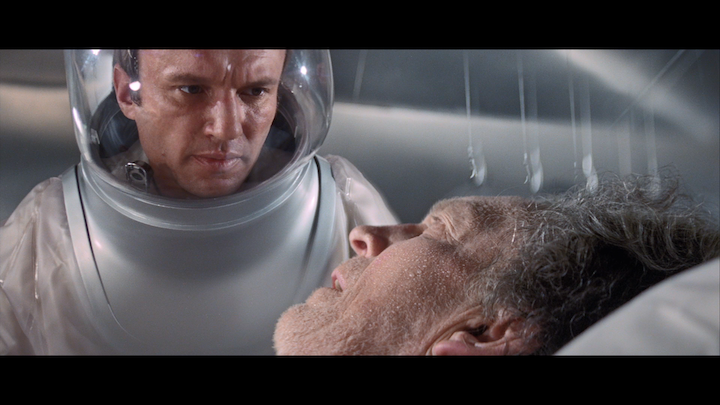 “The Andromeda Strain” was a 1971 Sci-Fi Thriller adapted from the novel written by Michael Crichton (best known for “Jurassic Park”) and directed by a very well known director for the time (Robert Wise). The film included a great primary cast of four actors that played wonderfully off of one another and the special effects for their time were pretty impressive.

In terms of the 2019 “Special Edition” Blu-ray Disc release we get here from Arrow Video, this has an impressive new 4K restoration that earns it a very nice rating in terms of video quality. They’ve gone back and restored the sound a tad bit here as well on this release and it gets presented nicely in a lossless (Uncompressed Linear) PCM Mono 1.0 mix that earns it a nice rating for audio quality. Finally, you get a solid set of bonus materials that total up to roughly around 80 minutes or so. Plus, there is a reversible side of the cover art included in terms of packaging.