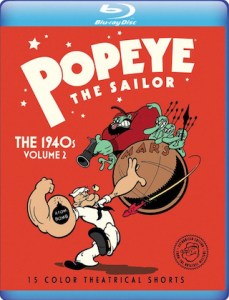 More of the classic colored cartoon theatrical shorts of “Popeye The Sailor: The 1940s Volume 2“ are coming to Blu-ray Disc on June 18th via Warner Archive. Tech specs for the release include full 1080p HD video in the 1.37:1 aspect ratio and DTS-HD Master Audio 2.0 sound. All of the shorts have been remastered in 4K from the original camera negatives. The 15 shorts set to be included on the release are as follows:

UPDATE: The Blu-ray Disc is now available to pre-order from Amazon and directly from WBShop. Further below, after the break, you can find some info Warner Archive has regarding this upcoming Blu-ray release.

Here come 15 previously unreleased adventures featuring our favorite two-fisted fighter that are literally out of this world! The secret to the seaman’s success is “location, location, location,” and with this new collection, you’ll travel with Popeye and crew into outer space, all around the globe and under the sea!

Continuing the chronological theatrical releases, this set covers the years 1946 and 1947. Popeye not only rockets to Mars, he explores the ocean deep, becomes a cowboy out West, fights pirates on the high seas and tackles wild game in Africa. He and his lady love, Olive Oyl, also find romance (and usually a Bluto-like rival) while traveling back to medieval times or exploring the fictional Middle Easter city of Badgag, as well as climbing mountain peaks in the frozen Klondike.

This is classic animation at its finest – featuring zany cartoon action from the pen of veteran Jim Tyer and powerfully dynamic direction from animation legend Bill Tytla. Packed with a punch, loaded with laughs and heaping with heart, The 1940s, Volume 2 comes to port with plenty of Popeye appeal.