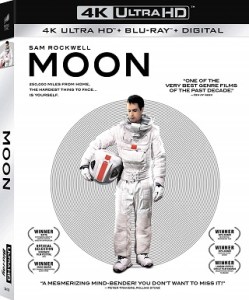 The 2009 science fiction film “Moon“ starring Sam Rockwell is officially coming to 4K UHD Blu-ray on July 16th via Sony. The modern sci-fi classic, celebrating its 10th anniversary, was directed by Duncan Jones. The tech specs for the 4K release include video in the 2.35:1 aspect ratio with HDR10 form of High Dynamic Range and Dolby Atmos sound. The release will come in the form of a “combo pack” with a Blu-ray Disc and a digital copy of the film. The 4K UHD Blu-ray is now available to pre-order over at Amazon. Bonus materials set to be included on the release are listed below.

Bonus materials included on the Blu-ray: