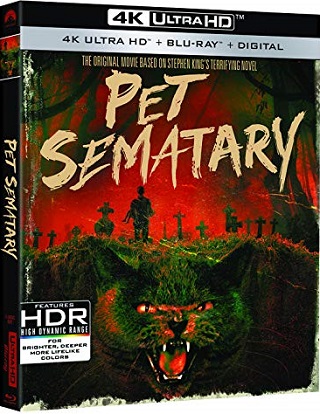 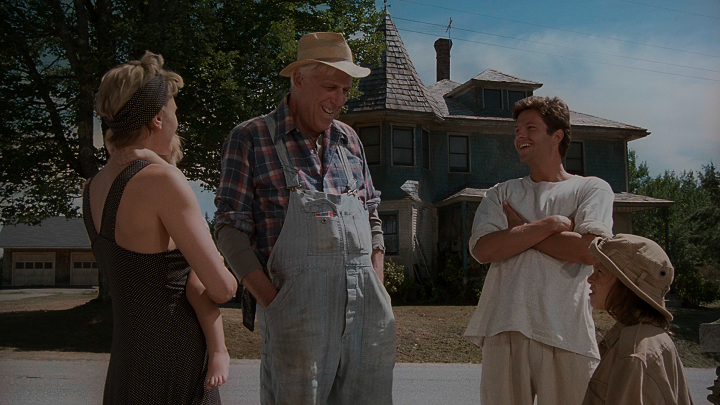 “Pet Sematary” was a 1989 film adaptation of a Stephen King novel, of the same title. The film was directed by Mary Lambert, best known for her work directing music videos for such artists as Madonna and Janet Jackson. The screenplay to the film was written by none other than the author himself Stephen King.

The story here involves a family that moves into a new house that happens to be beside a busy road, traveled constantly by trucks and something else. The husband “Louis Creed” (Dale Midkiff) and wife “Rachel Creed” (Denise Crosby) have two young children. Their children include a boy toddler named “Gage” (Miko Hughes) and his slightly older sister “Ellie” (Blaze Berdahl). The family is outside looking around their new home when fate will lead them to be introduced to their neighbor “Jud Crandall” (Fred Gwynne).

The neighbor, Jud, is an extremely friendly older gentleman that has lived in the area all of his life and knows his way around. He first warns the wife and husband that the road is very dangerous with trucks speeding and then shows them that they live right next to a pet cemetery (spelled incorrectly on its sign). This scares the daughter because she has a cat (“Church”) and she doesn’t want to ever imagine having to bury her pet in this place.

I could go on to tell you what happens but the majority of you know this story all too well, so I’ll cut this short. Let’s just say that the film’s tagline of “sometimes dead is better” is very much something you will learn to be true by the end of this film. This is by far one of the best film adaptations of a Stephen King story and one of my personal favorites. It’s worth noting that there are some very memorable supporting performances here from Brad Greenquist (“Victor Pascow”) and Susan Blommaert (“Missy Dandridge”). This film would go on to be the highest grossing horror film for its time, Director Mary Lambert would go on to make a sequel to this film with “Pet Sematary II“ (1992) and there’s now a 2019 film adaptation of the original story coming out.

This comes to 4K UHD Blu-ray presented in the 1.78:1 aspect ratio, just as it was on the previously released Blu-ray, however, it was actually originally shown in the 1.85:1 aspect ratio during the theatrical run. This means you don’t get any black bars at the top and bottom and it entirely fills a widescreen display. “Pet Sematary” [1989] was shot on 35mm film using Panavision cameras and spherical lenses, according to IMDb.

Scenes have been perhaps modified in terms of brightness not just from the addition of high dynamic range. Mary Lambert mentions this somewhat in her interview on the special features of this [4K] disc. The colors are more realistic here with HDR, and flesh tones appear a whole lot more accurate than the previous Blu-ray release.

The darker nighttime scenes are almost near pitch black as they should be. The overall black level is solid here all throughout the film, and I don’t believe it to be from overly using crush. Sure, I think some crush was used and I won’t deny that but it helps to make things look darker in the visual sense that is very fitting to the horror genre. Still, there are bright daytime scenes that don’t quite “pop” but do stand out, as they should like the opening scenes when the family first arrives at the new home and with the red trucks passing by constantly on the road.

There’s a nice subtle amount of film grain that has been retained here in this restoration. I do believe that a very tiny bit of DNR (digital noise reduction) appears to perhaps have been applied, but if so it has been done in a tasteful manner. Some of the special effects shots have also been modified (fixed) involving the jogger from the college. They look a whole lot more believable now, with these changes.

“Pet Sematary” is an impressive restoration effort here in 4K and looks pretty much damn near perfect. Some will complain that when viewing it with HDR it appears darker than even the new Blu-ray version from the very same restoration, and they’re right to notice that. However, this 4K presentation appears darker and more realistic with the high dynamic range which helps to deliver a more detailed and realistic version of the film. Some might even be upset about the changes to the special effects, but once again it was done in a very tasteful manner using a process called digital manipulation.

Director Mary Lambert and the folks at Paramount have done a very impressive job here on going back and giving the film its restoration, the 4K treatment, and even a new superior Blu-ray (included in this release). I’ll end by saying that this is one of the finer looking films out there thirty years or older in terms of catalog titles to come to the 4K format. It’s also the best I’ve ever seen this film look. I’ll hear some feedback from those who will disagree but that’s common and I stand by this video presentation being something that does the film justice – even, I’m sure, in the eyes of the director herself. 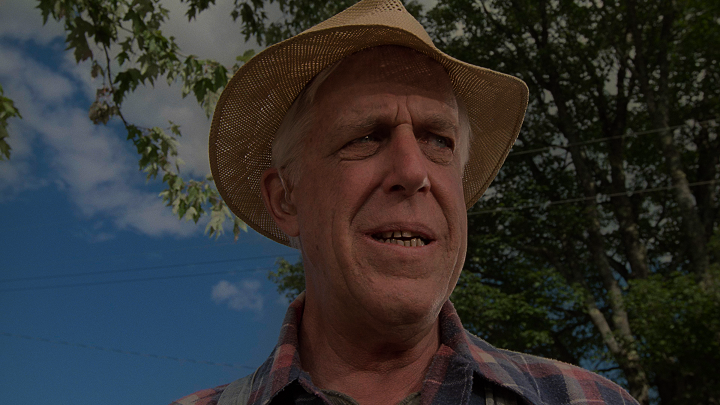 Audio here is presented in DTS-HD 5.1 Master Audio, just as on the previously released Blu-ray Disc. In fact, this seems to be the very same mix that was used on the 2012 Blu-ray release. The film actually only received a Dolby Stereo mix during its original theatrical release, according to IMDb.

The music and sound effects make nice use of the rear channel speakers and subwoofer for bass. You’ll hear the majority of them coming from the front channels though, with dialogue mixed perfectly into the center channel speaker. There are some occasional quieter scenes that run a pretty low bitrate but the more climactic scenes come across just as intense as they should and run a bit higher bitrate for the audio codec.

The 5.1 mix makes good use of panning from the left to right or from the front to rear channels for cars on the passing busy road and in another scene. It’s very effective and helps make you feel right there in the middle of things. The rear channels get used nicely for sound effects such as thunder later in the film, as well as the subwoofer in a pretty decent fashion. Trucks, specifically tractor and trailers, sound just as loud and threatening as they should in this mix.

I can’t confirm that this is a new version of the audio mix, but I can say that it sounds pretty much identical. Still, it’s always been a good 5.1 lossless mix even when we got this film first released back in 2012 on the original Blu-ray, and it holds up to be just as impressive to this day. The original music composed by Elliot Goldenthal can be downright haunting as well as just flat-out creepy at times, starting during the unforgettable opening of the film. It’s nothing over-the-top but it certainly has its moments where it makes nice use of the surround to keep you almost just as into the film visually as you do in terms of sound. 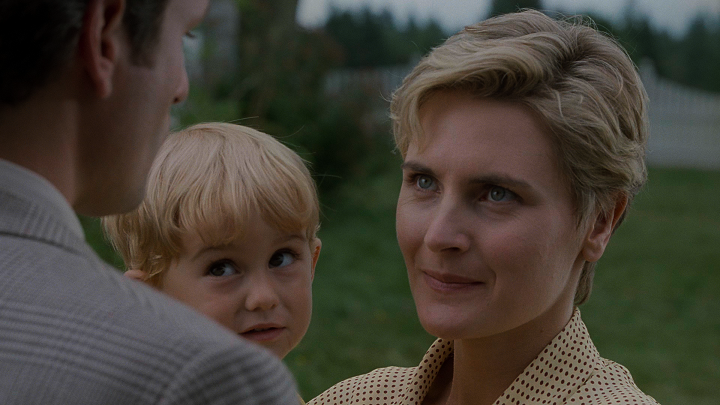 Bonus materials are presented in both HD and SD (standard definition) video with Dolby Digital 2.0 Stereo sound. Those included on the 4K Disc are listed below:

The other bonus materials are on the “Extras” section of the Blu-ray Disc and include all of the features listed above as well as the original special features. These original featurettes are presented in SD (standard definition) video with Dolby Digital 2.0 Stereo sound.

Original Special Features (taken from a 2006 DVD release) include:

Overall the bonus materials here are a nice improvement over what we originally got on the previous 2012 Blu-ray release. There are new extras and the old supplemental material is ported over to the new Blu-ray release. You don’t get all of the bonus materials on the 4K disc but you get all of the new ones and the audio commentary with the director ported over, so that’s enough. 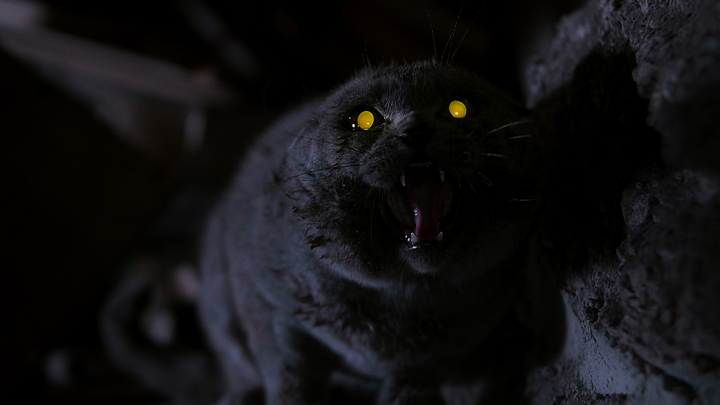 “Pet Sematary” is one of Stephen King’s most memorable film adaptations and still holds up to the test of time, thirty years now after its original theatrical release. It’s worth noting that there’s actually a new 2019 adaptation of the story coming out as a film soon, also from Paramount. This original 1989 film came with an amazing understanding of King’s work from the filmmaker and even his contribution as the author actually wrote the screenplay adaptation. The cast here, especially Dale Midkiff, Denise Crosby, and the late Fred Gwynne, all gave excellent performances that made this what is it – even the children.

The 4K debut of the film brings us a new restoration of the film that was actually supervised by the film’s director Mary Lambert. You get to see a more accurate approach to both color and brightness here with the addition of high dynamic range (HDR). Some may say that it’s darker and you’re right, it is, to be more realistic and to add to the overall horror vibe of the film. I have to say that I feel it works and left me feeling I had experienced the film in the best quality I’ve ever seen it in (visually). In terms of sound, it gets the very same lossless format (DTS-HD MA) and a 5.1 configuration here instead of opting for something like Atmos. I have to say the lossless 5.1 mix proves to do the film justice and I don’t feel that it needed any changes, as the original Blu-ray always had a nice sound mix.

Lastly, you get a nice bit of new bonus materials here included on both the 4K disc and the Blu-ray, where you also get the original special features. It’s a nice solid set of extras, along with an audio commentary ported over from the film’s director and the addition of a digital copy of the film.