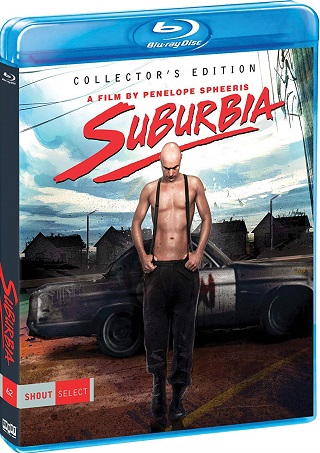 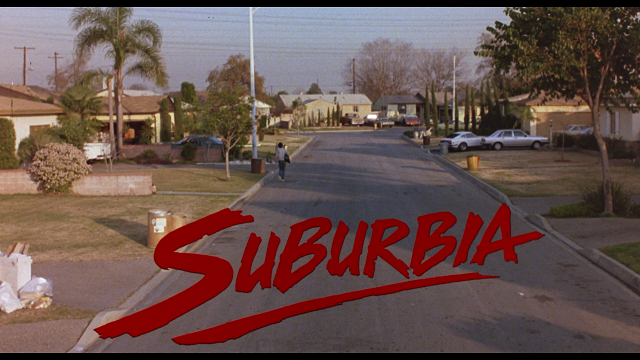 “Suburbia” from 1983, not to be confused with another film that used the same title, was a hard-hitting drama both written and directed by Penelope Spheeris. Spheeris is best known for directing such films as “Wayne’s World” (1992), “The Beverly Hillbillies” (1993), and “Black Sheep” (1996). The filmmaker’s directorial debut came with the documentary “The Decline of Western Civilization” (1981). She would also direct that film’s sequels. This film, Suburbia, was produced by the legendary Roger Corman.

The story first starts out here briefly with the perspective of a runaway teenage girl who is hitchhiking on the freeway. Next, we see the perspective of a teenage boy living with his abusive alcoholic mother and even more innocent younger brother. Eventually, he can’t take her abuse anymore and leaves home, running away and off to presumably live a hard life on the streets. Luckily for him, there’s a new type of culture really catching on, in a post-hippie and disco era, where a lot of runaway teens grouped together, living (squatting) in houses together like a collective. Sure, they would raise their share of hell along the way (in love of anarchy) but they deep down knew the rules were that of survival first and foremost.

These kids also chose to rebel and question authority figures of all types. The real glue that bound them together was the music of early eighties punk rock from the Los Angeles scene that served then as the soundtrack of people’s lives. It just so happens that it’s part of a soundtrack to this film as well with a few performances from punk bands of that time. Those punk rock bands include T.I., T.S.O.L. and The Vandals.

The kids of T.R. house are a group of likable characters and really aren’t doing anything all that wrong – with the exception of one kid dealing drugs. It’s a nice story here with some laughs for certain but it comes with some drama along the way. There’s heart here, that much is for certain. The police even actually try to help these kids stay out of trouble, and that’s not a spoiler. It’s a film that I find to be really captivating in ways, and I’m sure it can be offensive to others. “Suburbia” was a film that showed the early eighties from the viewpoint the runaway youth had, along with their punk lifestyle and also gave you a slight taste of the Los Angeles punk rock music scene of that time. 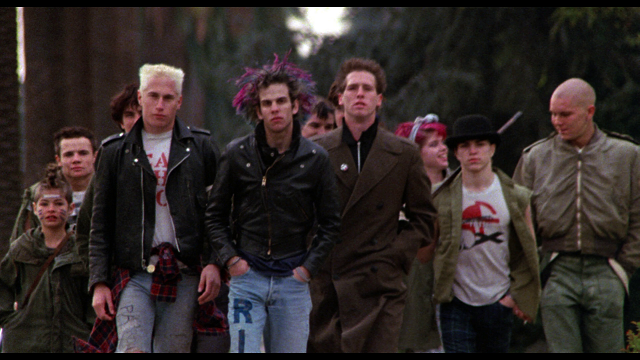 “Suburbia” is presented in the original 1.85:1 aspect ratio, as it was shown theatrically. It was shot on 35mm film using the Arriflex 35 Bl camera. The Blu-ray transfer here comes from a new 4K scan of the original film elements.

To be from 1983 and shot on just a million dollar budget, this looks somewhat impressive at times and a tad bit softer at other times. That’s often typical of early eighties films in ways, especially on smaller films like this. The new scan has some obvious visual imperfections left in like dirt and specks. It works for the subject matter here, in my opinion, and gives it more unapologetically rough HD presentation at times. There’s a pretty vibrant color palette and the flesh tones, for the most part, appear accurate, all thanks to a nice job on the color timing.

The live performances by the bands at the concert(s) all offer some nice detail in the closeups of the lead singers of each band. The same can be said for close-ups a majority of the time throughout the film with the characters (actors). Some scenes just seem softer, and I think a lot of this has to do with the lens and focus.

All and all, it is as solid of a transfer as you’re going to see this film anytime soon. It’s a nice improvement over the older 4×3 standard definition version that was on VHS, DVD and is now even available for online streaming. The new 4K scan that the folks at Shout! Factory has done here proves to be worth the effort. It’s made this old punk happy to see this film looking as good as it can. 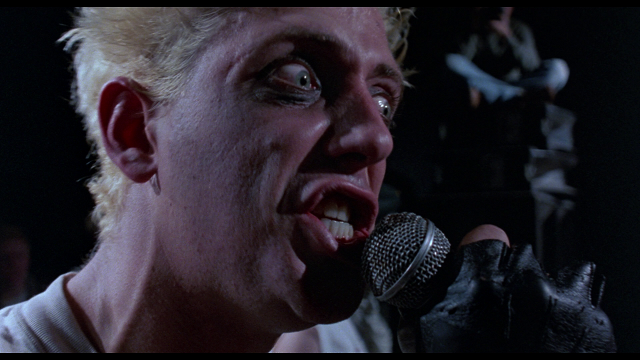 Audio here is presented in DTS-HD Master Audio 2.0 Mono. This makes sense considering the film was originally presented in mono during its theatrical run.

There’s an obvious amount of hiss still here, but it sounds better than how the film did in previous releases (or streaming online). The mix has been slightly cleaned up, but it’s still very authentic in the rough nature of the film. The original music composed by Alex Gibson for the film fits that early eighties film vibe perfectly and sounds nice here in a lossless mono mix. Dialogue can sometimes feel a tad bit muffled, as perhaps it was not recorded properly? It’s not something that happens all too often, but it is something I’d be oblivious to not mention. Thankfully the dialogue, much like acne, clears up throughout the film as it progresses. In comparison to other versions, this feels brighter with a sense of improved fidelity. That’s how analog sound in the early eighties was, especially on a small film like this.

The live performances by bands like T.I. with “Richard Hung Himself”sounds really good for sound quality in terms of punk rock standards. The band T.S.O.L. performs their songs “Wash Away” and “Darker My Love” with the latter being exclusive to the film’s soundtrack. Finally, you get The Vandals doing their songs “The Legend of Pat Brown” and “Urban Struggle” – which both sound pretty good.

This mix is solid, especially to only be in Mono and the music feels just as raw as it should during the punk shows. Admittedly there are some occasional cracks and pops in the sound mix but it’s not entirely bothersome. Those scenes with cracks and primarily happen during the opening 15 minutes or so of the film. However, there are more pops and cracks along the way. 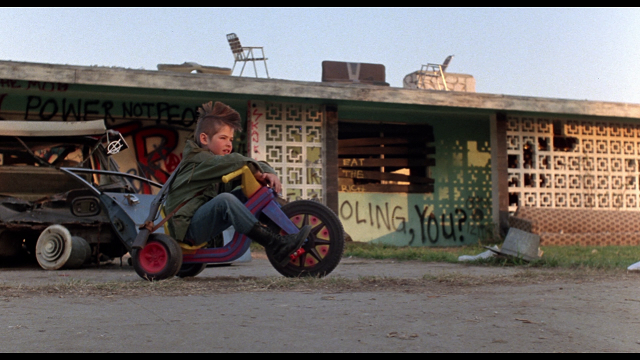 Bonus materials on this release are presented in SD (standard definition) and HD (high definition) video with Dolby Digital 2.0 Stereo sound. They include the following:

Overall the bonus materials here are alright, as you get two audio commentary tracks that both feature the film’s writer and director (Penelope Spheeris). Admittedly though, it would have been nice to have seen something like a retrospective of sorts. Sadly it’s just the trailer, promotional TV spots and a still gallery rounding things out here in terms of extras. If you’re a fan of the film you will definitely find the audio commentary tracks both worth giving a listen. 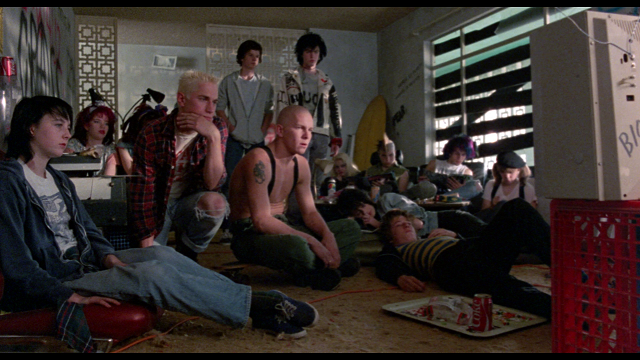 “Suburbia” was a great film that really captured the early eighties punk scenes and culture of runaway kids that would frequent the shows (concerts). It’s hard to watch the film for some, and it is most certainly filled will lots of things that people would find politically incorrect by today’s standards. Be warned, this film is not for everyone and that’s one reason I really enjoy it.

The video quality is pretty much solid here and the audio quality is pretty decent with a few problems like hiss and the occasional pops. The bonus materials are a bit short really with only two audio commentary tracks, the theatrical trailer, some TV spots, and a still gallery. Still, it’s enough to leave fans somewhat pleased.