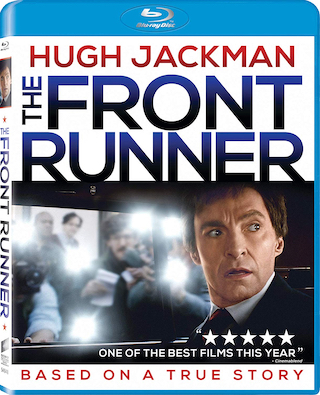 Nothing could get in his way. Except himself.

CULVER CITY, Calif. (January 14, 2019) – Rally behind Golden Globe®-winner1 and Academy Award®-nominee2 Hugh Jackman’s captivating performance as the charismatic politician Gary Hart in THE FRONT RUNNER, releasing on digital, Blu-ray™ and DVD February 12, 2019 from Sony Pictures Home Entertainment. Academy Award®-nominated3 and Golden Globe®-winning4 director Jason Reitman captures the explosive tension between journalism and politics in this thrilling drama about the rise and fall of Hart’s 1988 bid for the U.S. Presidency, adapted from the book All The Truth Is Out by Matt Bai.

Along with three deleted scenes, the digital, Blu-ray and DVD releases of THE FRONT RUNNER dive into the many facets of production with engaging feature commentary from director and co-writer Jason Reitman, producer Helen Estabrook, production Designer Steve Saklad, costume designer Danny Glicker, and cinematographer Eric Steelberg. In the featurette “The Unmaking a Candidate,” the filmmakers and cast take on the difficult questions the film presents — What is news? What do we expect of our politicians? What is relevant? Also, learn more about Gary Hart, the media’s treatment of women, and more in this absorbing deep dive.

Directed by Jason Reitman, THE FRONT RUNNER is based on the book All the Truth Is Out by Matt Bai and a screenplay by Matt Bai and Jay Carson and Jason Reitman. The film was produced by Right of Way Films, Jason Reitman and Helen Estabrook and BRON Studios along with Aaron L. Gilbert. Matt Bai, Jay Carson, Michael Beugg, Jason Blumenfeld, George Wolfe, Jason Cloth, Chris Conover and Edward Carpezzi are executive producers.

THE FRONT RUNNER has a run time of approximately 113 minutes and is rated R for language including some sexual references.