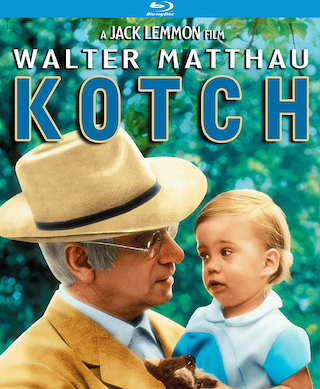 BRAND NEW HD MASTER FROM A 4K SCAN OF THE ORIGINAL CAMERA NEGATIVE! The iconic comedy duo of Walter Matthau (Charley Varrick) and Jack Lemmon (Irma La Douce) team up again, but this time with Lemmon behind the camera, in his outstanding directorial debut and Matthau in his Oscar-nominated leading performance as Joseph P. Kotcher. Kotch is a kindly, if occasionally exasperating widower who has worn out his welcome with his son, daughter-in-law and grandson. Despite his many pearls of wisdom, he soon finds himself feeling useless and unwanted. But just when he seems destined for a retirement home, Kotch befriends a feisty, unwed, teenage mother-to-be (Deborah Winters, Blue Sunshine) and embarks on the unlikeliest of adventures. Richard H. Kline (Mr. Majestyk) shot this delightful comedy-drama that bridges the proverbial generation gap with laughter, irony and compassion–with a script by John Paxton (Crossfire).