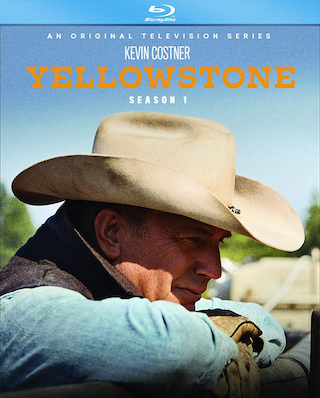 The TV series “Yellowstone Season One“ starring Kevin Costner is coming to Blu-ray Disc on December 4th via Paramount. The show, which can be seen on Paramount Network, co-stars Wes Bentley, Kelly Reilly, Luke Grimes, Cole Hauser, Kelsey Asbille, Danny Huston, Gil Birmingham, Brecken Merrill, and Jefferson White. Tech specs for the release include 1080p HD video in the 2.00:1 aspect ratio and DTS-HD 5.1 Master Audio sound, spanning across a 3-disc set. This Blu-ray set is now available for pre-order over at Amazon. Bonus materials set to be included on the release, said to be roughly 80 minutes in length, can be found listed below.

The epic story of a multi-generational family of ranchers was an immediate ratings hit on Paramount Network, drawing 5 million viewers in Live+3 and making it the top summer drama series debut on cable or broadcast.  “YELLOWSTONE” was also the second most-watched TV series on ad-supported cable in 2018, only behind “The Walking Dead.”  The series has already been renewed for a second season.

The “YELLOWSTONE” Season One 3-disc Blu-ray or 4-disc DVD set includes all 10 hour-long episodes from the inaugural season, plus more than 80 minutes of behind-the-scenes featurettes, including an all-new exclusive interview with Kevin Costner and Taylor Sheridan.