RUMOR: Disney’s “The Lion King” coming to 4K in December with a Steelbook 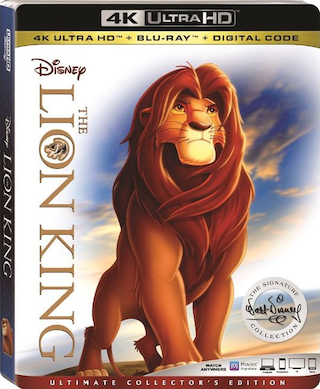 RUMOR: The 1994 animated film “The Lion King” is coming to 4K UHD Blu-ray on December 4th via Disney, according to early alerts to retailers. This had been rumored before and now we are seeing signs it may be true, although the studio has yet to officially announce the release.

There is no info yet regarding technical specs or bonus materials set to be included on the 4K release, but it is known that it will come in the form of a “combo pack” with a Blu-ray Disc included and a Digital Copy of the film. The film on 4K UHD Blu-ray is available for PRE-ORDER now over at both Amazon and Best Buy – where the release date is listed. There’s also going to be a 4K Steelbook release Exclusive to Best Buy, which is also up for pre-order and pictured below.