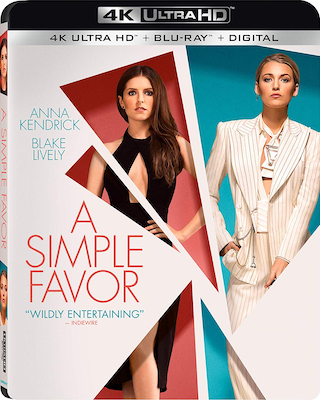 The 2018 film “A Simple Favor” starring Anna Kendrick and Blake Lively is coming to 4K UHD Blu-ray and Blu-ray Disc on December 18th via Lionsgate. The film was directed by Paul Feig and is based on the novel written by Darcey Bell. The film has received much critical acclaim, and in fact is “Certified Fresh” over at Rotten Tomatoes.

Tech specs for the 4K release include 2160p video in the 2.00:1 aspect ratio with both Dolby Vision and HDR10 forms of High Dynamic Range and Dolby TrueHD 7.1 sound. The tech specs for the Blu-ray release include 1080p video in the 2.00:1 aspect ratio and the same Dolby TrueHD 7.1 sound. Both releases will come in the form of a “combo pack” with the 4K getting a Blu-ray included, the Blu-ray getting a DVD included, and a Digital Copy of the film included on each. The PRE-ORDER listings for the 4K UHD Blu-ray and Blu-ray are both now available over at Amazon. Bonus materials set to be included on both versions are listed below.

Below, after the break, you can find the official announcement for these releases.

“A SINUOUS THRILLER WITH AS MANY TWISTS AND TURNS AS A MOUNTAIN ROAD.”

Can You Keep a Secret?

4K Ultra HD™ to Include

A Simple Favor centers around Stephanie (Kendrick), a mommy vlogger who seeks to uncover the truth behind her best friend Emily’s (Lively) sudden disappearance from their small town. Stephanie is joined by Emily’s husband Sean (Golding) in this stylish thriller filled with twists and betrayals, secrets and revelations, love and loyalty, and murder and revenge.

Take home A Simple Favor and dive headfirst into the twists and turns of this thrilling dark comedy with 3 audio commentaries with the cast and crew, 8 making-of featurettes, a gag reel, deleted scenes, and an alternate ending.  Experience four times the resolution of Full HD with 4K which is joined by Dolby Vision™ HDR, bringing the stunning cinematography of this stylist thriller to life. When compared to a standard picture, Dolby Vision can deliver spectacular colors never before seen on a screen, highlights that are up to 40 times brighter, and blacks that are 10 times darker. The A Simple Favor 4K Ultra HD Combo Pack, Blu-ray Combo Pack, and DVD will be available for the suggested retail price of $42.99, $39.99, and $29.95, respectively.

Rating: R for sexual content and language throughout, some graphic nude images, drug use and violence.