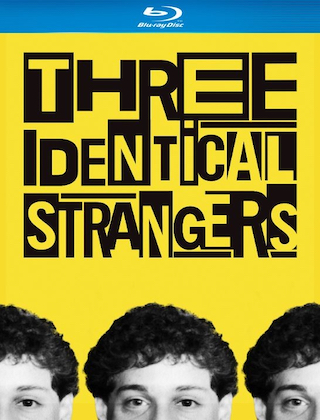 The 2018 Tim Wardle directed, critically-acclaimed, documentary “Three Identical Strangers“ is coming to Blu-ray Disc on October 2nd via Universal. The documentary tells the unique story of three identical twins that were separated at birth. They never even knew they had biological siblings, let alone identical twins of themselves out there. The three men were all adopted, and would later find out of being separated at birth. This film is “Certified Fresh” over at Rotten Tomatoes, where it carries an impressive 97% rating.

Tech specs for the release include full 1080p HD video in the 1.85:1 aspect ratio, while audio format and configuration have not yet been detailed. Stay tuned for an update there on the audio specs. The film on Blu-ray is now already available to PRE-ORDER over at Amazon and Best Buy. NOTE: The artwork (pictured above) was taken from retailer Best Buy, although Amazon features slightly different artwork. The studio hasn’t official released finalized art on the press site, so I’m not sure which (if either) will be the final art. Just letting you all know that, in case you notice and wonder. The Blu-ray release will come with a Digital Copy of the film included. Bonus materials set to be included on the release are listed below.