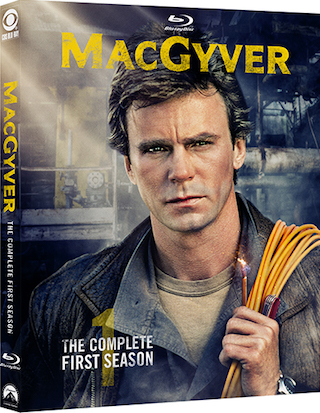 The original 1985 TV series starring  Richard Dean Anderson “MacGyver: The Complete First Season“ is coming to Blu-ray Disc on October 30th via CBS/Paramount. This box set will include all 22 episodes from the first season in remastered HD video. Tech specs and bonus materials for this release have not yet been fully detailed, but stay tuned for any update. It’s worth noting that this show ran for a total of 7 seasons, so hopefully CBS/Paramount plan to release the remaining six in the coming years. The release is available for PRE-ORDER now over at Amazon. Below you’ll find a video I found on a foreign website (I believe it was French) showing the comparisons side-by-side of the original and new HD restored footage. This is not direct from CBS/Paramount, so keep that in mind.

Lastly, here’s some info that TVShowsOnDVD posted regarding this:

LEAVE HIM TO HIS OWN DEVICES. Own all 22 episodes from Season One of the original MacGyver, newly HD-remastered on Blu-ray for the first time ever! Re-live the adventures of Angus MacGyver (Richard Dean Anderson), a secret agent that outwits his deadly enemies with quick thinking and a few everyday objects he finds along the way. Armed with duct tape, a pocketknife, and scientific training, this expert problem solver’s missions are more intense than ever before. Get a closer look at the hero who proves brains beat brawn every time. FIRST TIME ON BLU-RAY! BRAND NEW HD TRANSFER; LOOKING AND SOUNDING BETTER THAN EVER!