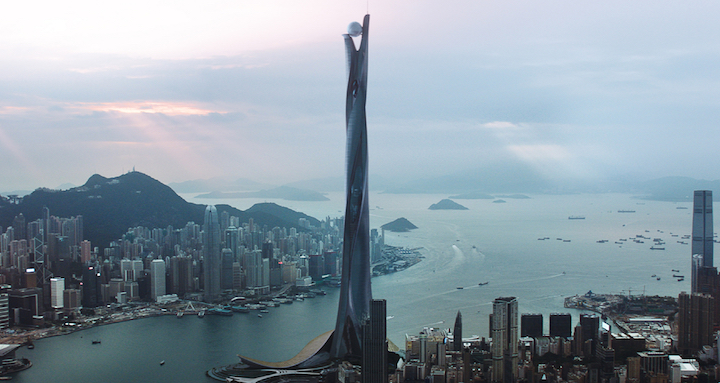 “Skyscraper“, tells the story of Will Sawyer (Dwayne Johnson), a FBI agent, whose life takes a 180 when a hostage situation goes wrong. Sawyer is horrifically injured, leaving him as an amputee. While the injury is clearly terrible, its due to this injury that Sawyer meets his future wife, Sarah (Neve Campbell). Leaving behind his former FBI life, Swayer focuses on building security, specifically for skyscrapers. Due to his knowledge on the subject, Sawyer is tasked with inspecting the ‘tallest’ and ‘safest’ skyscraper, in Hong Kong, known as ‘The Pearl,’ before its open to the public for residency.

After his inspection, Sawyer concludes that the building is not impenetrable, and warns of its risks. Its soon after this that, naturally, the building comes under attack by terrorists, setting the building on fire with Swayer’s family trapped above the blaze. To make matters worse, Swayer soon finds himself framed for a crime, leaving him to race against time in hopes of finding out who framed him, as well as save his family. What results is a somewhat over-the-top film that mostly works due to the charisma Johnson provides, as well as the sharp direction by Thunder. 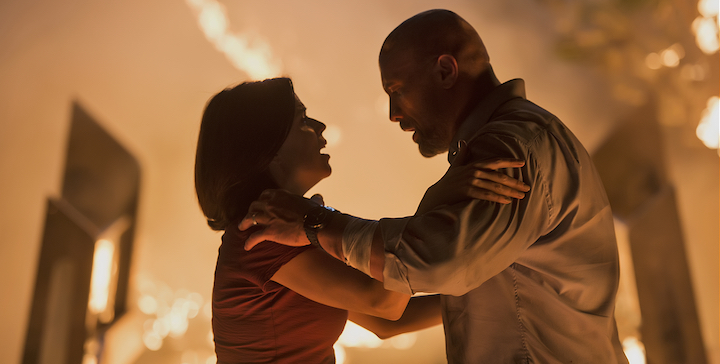 Having worked with Johnson previously on “Central Intelligence“, Director Rawson Marshall Thunder clearly saw a kind of chemistry with Johnson so much that he decided to make “Skyscraper” his first non-comedic film he’s ever made. The two work well together, with Johnson having the kind of charisma that makes him seem more like an everyday person versus a big action superstar. As Sawyer, he emotes well the fear he has for his family, in particular his wife mainly due to the fact that she, essentially, saved his life.

Director Thunder, while taking notes from past films like “The Towering Inferno” and “Die Hard”, is able to make “Skyscraper” a film of his own due to some slick action moments, a few over-the-top sequences, and a true edge-of-your-seat mentality throughout. Even though the film does run a bit short at 102 minutes, there’s still enough to enjoy here, which is all we can ask for in a summer flick.