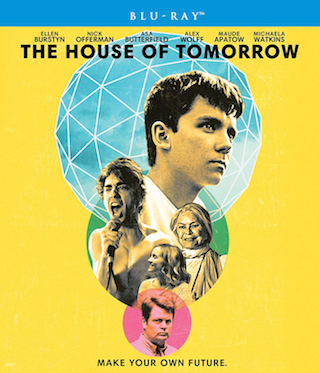 THE HOUSE OF TOMORROW

Written and Directed by Peter Livolsi

Arrives on Blu-ray™, DVD, Digital, and On Demand

Academy Award®-winner Ellen Burstyn (Requiem for a Dream, Interstellar), Nick Offerman (Fargo, Hearts Beat Loud), Asa Butterfield (Ender’s Game,Miss Peregrine’s Home for Peculiar Children), Alex Wolff (Hereditary, Patriot’s Day), Maude Apatow (Girls, Assassination Nation), and Michaela Watkins(Transparent, Casual) star in THE HOUSE OF TOMORROW, a captivating coming-of-age drama written and directed by Peter Livolsi, debuting on digital, on demand, iTunes, Blu-ray, and DVD August 14, 2018 from Shout! Factory. The Blu-ray, DVD, and iTunes releases contain an audio commentary by cast and director, the New York movie premiere Q&A, and a conversation between Ellen Burstyn and Peter Livolsi. Pre-order is available now at ShoutFactory.com
Sebastian (Asa Butterfield) is a sixteen-year-old who has spent most of his life with his Nana (Ellen Burstyn) in their geodesic dome home, a tourist attraction where she raises him on the futurist teachings of her former mentor Buckminster Fuller in hopes that one day Sebastian will carry Fuller’s torch and make the world a better place.
But when illness sidelines Nana, Sebastian begins sneaking around with Jared (Alex Wolff), a chain-smoking, punk-obsessed sixteen-year-old with a heart transplant who lives in the suburbs with his Bible-banging single father, Alan (Nick Offerman), and teenage sister Meredith (Maude Apatow). Sebastian and Jared form a punk band and with his Nana’s dreams, his first real friendship, and a church talent show at stake, Sebastian must decide if he wants to become the next Buckminster Fuller, the next Sid Vicious, or something else entirely.
THE HOUSE OF TOMORROW is produced by Tarik Karam, Danielle Renfrew Behrens, and Superlative Films in association with Water’s End Productions. Ellen Burstyn and Nick Offerman serve as executive producers along with Tom Dolby, Bill & Ruth Ann Harnisch, Donna & Kevin Gruneich, and Patty Quillin. The film was supported by the Sundance Institute and the Tribeca Film Institute Sloan Filmmaker Fund.
About Shout! Studios
Shout! Studios is the filmed entertainment production and distribution arm of Shout! Factory, specializing in all aspects of distribution, including theatrical, VOD, digital, and broadcast. Reflecting Shout! Factory’s ongoing commitment to innovation and excellence, Shout! Studios champions and supports like-minded filmmakers and creators at the forefront of pop culture, driving creative expression and diversity in independent storytelling. Shout! Studios finances, produces, acquires and distributes an eclectic slate of movies, award-winning animated features, specialty films and series from rising and established talent, filmmakers and producers.
# # #