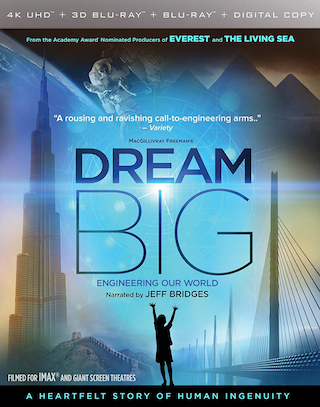 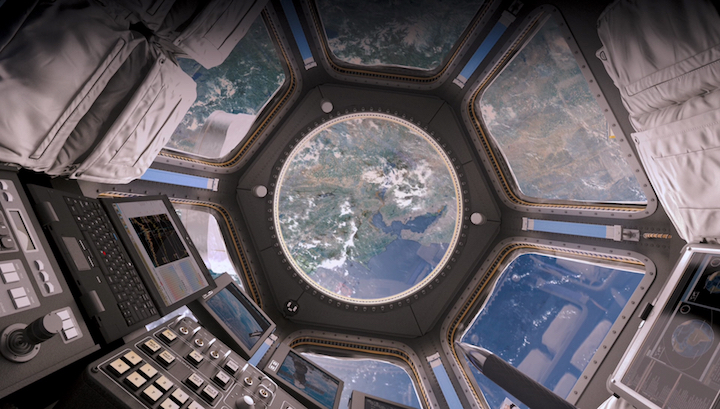 “Dream Big: Engineering Our World” was originally released in 2017 as an IMAX theatrical exhibition, as well as for other giant screen theatrical formats. The short was done by MacGillivray Freeman Films, the folks responsible for such IMAX classics as “Everest” (1998), and “The Living Sea” (1995), to just name a few.  The film was directed by Greg MacGillivray, who has IMDb directing credits for a total of 40 films – at time of writing this review. Also, on the film company’s official website it states that they have “made 37 giant-screen films,” so let’s leave it at that.

First off though, I totally suggest you check out the trailer (below) for the film, which is available in full 2160p 4K resolution on YouTube, as well as 1080p HD.

The film focuses on the field of engineering, the folks who help design things. Things such as bridges on all scales, buildings capable of taking earthquakes, robots, solar cars, and such, to just name a few things. The list goes on and on of what engineers are responsible for. Speaking of engineers: you’ll get to hear the stories from some engineers along the way, and also see projects that they are using their skills towards solving a problem, what engineers do. The engineers featured here in this short include Steve Burrows, Angelica Hernandez, Avery Bang, and Menzer Pehlivan.

Engineering is a really interesting field. Engineering is how most all things man has created over time, especially as of currently in terms of technological engineering and such. If you’re into math and/or science, have a child that is, or know someone is, this is the film to inspire them. If they love (or loved) playing with toy blocks (like Legos) and you can see them someday aspiring to design and/or build real structures of their own: this is for them, or perhaps even you. I know it certainly applies to me now, even as an adult. This makes you want to do just as the title suggests: “Dream Big.” The short proves to be very inspiring, educational, and informative for those of all ages just wanting to learn more about how things are made. Overall, this is one of the finer IMAX short subject documentary films Greg MacGillivray has made to-date. 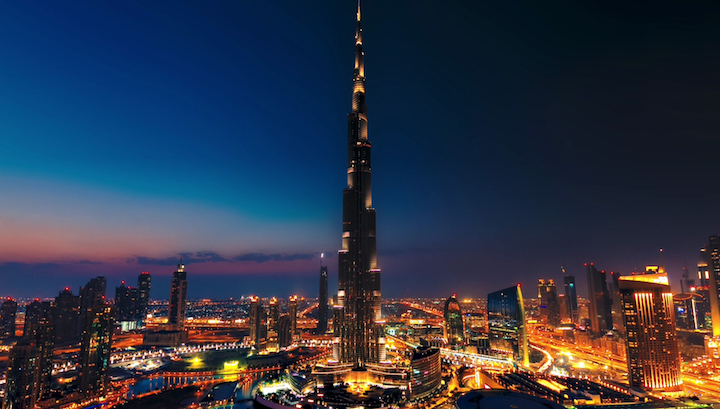 According to the technical specifications on IMDb, “Dream Big: Engineering Our World” was shot on IMAX 3D cameras originally, and was also presented during its IMAX exhibition in the 1.44:1 aspect ratio. However, here on home video in 4K, and on Blu-ray (in both 2D and 3D), the IMAX short film is presented in the 1.78:1 aspect ratio – filling your entire screen. This film on 4K UltraHD Blu-ray includes the standard HDR (HDR10) form of High Dynamic Range. It also features the option at the menu when you choose to play the film to experience it in SDR (Standard Dynamic Range) for those on 4K displays that lack HDR capabilities. A Blu-ray Disc is included in this release that (as mentioned before) functions both as a standard Blu-ray (in 2D) as well as a Blu-ray 3D, for those still on a 3D capable HD display. Just felt this was very much worth mentioning.

After the opening narration starts, about roughly less than maybe a minute or so in,  you’ll see the opening title sequence and this amazing CG animated shot of the inside of a space station capsule looking down on the earth as the hatches on the windows are opening. It’s an absolutely breathtaking sight to behold from the utter beginning of this short, with that part starting things off.

The first IMAX filmed footage you see really will grab your attention just as much, with some amazing aerial photography done by Ron Goodman up in the aircraft. This looks remarkable, giving you [the viewer] a look at things from a much larger perspective in the glorious IMAX sourced footage now presented in 4K with HDR behind it. It’s just downright amazing to behold, as with all IMAX filmed material. Speaking of the aerial photography, the flyover shots look incredible, done in locations such as San Francisco and China (especially along “The Great Wall“). These shots all look absolutely excellent, especially when you can watch them in your living room in 4K. The overall cinematography here looks great done by Brad Ohlund (Director of Photography).

Because of it being from an IMAX 3D source the amount of detail you’ll see here throughout is absolutely astounding, flat-out jaw-dropping in 4K (alone), and even more-so with the addition of HDR. Every tiny detail is emphasized here in 4K, and even more when viewing it in 4K with HDR. It’s just visually stunning as to the amount of detail found here. The black level is perfectly solid, fleshtones in video sequences appear accurate, even more-so when viewing with HDR. The color here really is remarkable and stands out as well, of course especially if you’re viewing it with High Dynamic Range. There’s not only “pop” visually in more bright vibrant colors, thanks to HDR, but there’s also some “3D pop” visually thanks to this being from the IMAX 3D camera source. That 3D tailored bit of cinematography really translates over nicely in 2D with some of the emphasis on objects from the 3D coming over and still standing out nicely in just 2D.

Looking at this 4K UHD Blu-ray release: I can only begin to express how much I believe that source material from IMAX (or 70MM shot for giant screen theaters) always makes for some of the most impressive “demo material” out there in terms of visuals on ANY 4K display. If they played this disc (correctly) at retail chains they’d have no problem selling 4K TVs. Let me end on this. I first got my 4K display and one of the titles I tested out immediately was an IMAX short subject film (also from Shout! Factory). From that moment on, I had a standard of what real true 4K material should look like, when it’s coming from an IMAX source, there’s just no going wrong. Sheer perfection, from Shout! Factory on this 4K release. 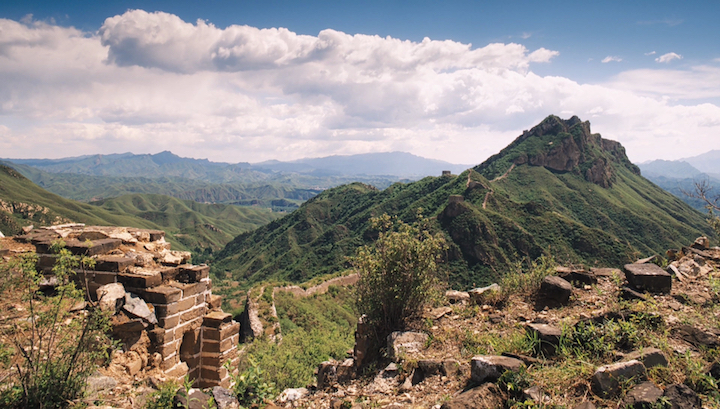 Audio here is presented in both Dolby Atmos and DTS-HD 5.1 Master Audio. It is worth noting that on the Blu-ray Disc you only get an Atmos and Dolby Digital 5.1 mix, in comparison to the 4K UHD Blu-ray.

According to IMDb‘s technical specifications this originally had a 12-track sound mix in its original IMAX theatrical presentation. It seems they’ve taken that source material and really put it to use in an at times intense Dolby Atmos mix, that’s sure to get your attention. The not-so subtle use of the height speakers here is sure to leave you on the edge of your seat, perhaps literally, on a few occasions throughout the film. It makes excellent use of the music throughout primarily the front left & right channel speakers with a slight bit of rear channel presence used. The action gets some very nice play in the rear channels to leave you pretty much feeling totally immersed in the experience – much like an IMAX theatrical viewing does, especially here though if you have a nice home theater setup.

There’s a few sequences where songs play and they sound remarkable here presented in an Atmos configuration. You’ll hear lots of rear channel usage during these musical numbers, more-so than the film’s original Score. The songs that play really stand out here, in both mixes. There is a really impressive amount of LFE  here with the amount of low-end you’ll get roaring from your subwoofer at times during the more intense scenes or musical accompanied sequences. All of the atmospheric sounds translate over nicely to the height speakers here in the Atmos, again leaving you totally feeling immersed.

The wonderful narration done by Jeff Bridges is delivered distinctly through primarily the front center channel, never once being overpowered by any action or music. That being said, for an IMAX documentary this really blew me away with the Dolby Atmos mix, and even was impressive with the DTS-HD 5.1 MA mix. I have to reward audio quality for what type of film or subject material (such as TV show, etc.), and this being said: this earns a perfect rating for its sound presentation(s). 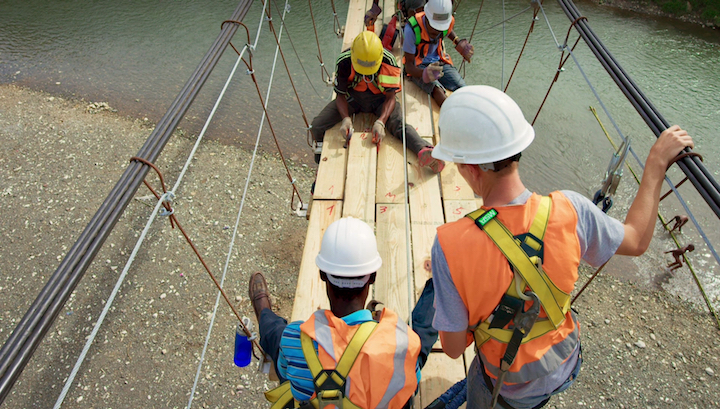 Overall, the bonus materials here are pretty decent: you get 42 minutes roughly of supplementals on the film itself, and another 11 minutes roughly of 4K trailers in 4K. Plus, you get the film in 3D via the Blu-ray which also has a standard 2D presentation, and lastly you get a Digital Copy of the film. Pretty decent set of bonus materials, sure to leave you both entertained, and informed after you watch the short itself.

Wow! This short subject documentary IMAX film proves to be very entertaining and inspiring, with one of the finer video and audio presentations on a 4K UHD Blu-ray release I’ve seen in quite some time – even in comparison to blockbuster major studio films. This has enough to attract those of all ages, and comes as highly recommended.