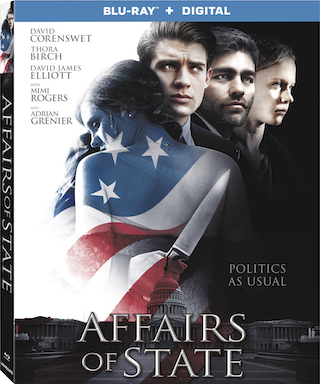 A gripping thriller that combines love, lust, and political scandal, Affairs of State arrives on Blu-ray™ (plus Digital), DVD, and Digital August 14 from Lionsgate. This film is currently available On Demand. A young D.C. aide kick-starts his government career by sleeping with powerful women. But after seducing a candidate’s daughter, he learns the game of politics can be a deadly one. Including a director’s commentary with Eric Bross along with deleted scenes and a trailer gallery, the Affairs of State Blu-ray and DVD will be available for the suggested retail price of $21.99 and $19.98, respectively.

In his quest for power, D.C. aide Michael Lawson will do anything to take part in Senator Baines’s White House campaign, including blackmailing Baines’s shady advisor (Adrian Grenier, TV’s “Entourage”) and sleeping with the candidate’s wife (Mimi Rogers). But when he gets involved with the senator’s alluring daughter, Lawson learns his dangerous game could have a deadly payoff. Also starring Thora Birch (Patriot Games), this pulse-pounding thriller is a perfect match for today’s turbulent political climate.

With Mimi Rogers Big Nothing, Lost in Space