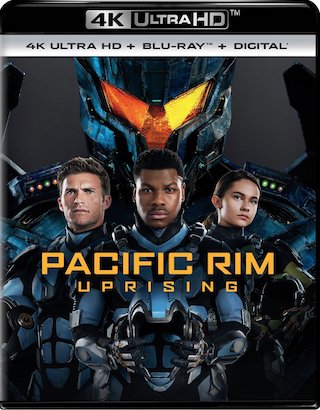 “Pacific Rim: Uprising” is the second entry in the “Pacific Rim“ series, but is not directed by Guillermo Del Toro (he produced the film) this time around (he turned down the project to go direct “The Shape of Water“, which would go on to win Best Picture – pretty good move, in my opinion).

The year is 2035, and it has been roughly 10 years since the “Battle of the Breach.” Former Jeager pilot Jake Pentecost (John Boyega, son of Stacker Pentecost – from the 1st film) makes his living stealing and sealing abandoned Jaeger parts in the Los Angeles area. He soon finds himself in hot water and he and a 15-year-old Jeager enthusiast Amara Namari (Cailee Spaeny) are arrested by the Pan-Pacific Defense Corp. Jake is given an ultimatum by his adoptive sister PPDC Secretary General Mako Mori (Rinko Kikuchi) – jail or return to the PPDC as an instructor to new pilots with Amara in tow. He obviously chooses the latter.

Upon arrival at the base in China, Jake meets fellow co-pilot Nate Lambert (Scott Eastwood). It’s soon learned that, by Mako, that the PPDC Jaeger program is threatened by Shao Corporation, and their mass deployment of Jaeger type drones. Before she can give her final assessment of the Jaeger drone program, Mako is killed by a rogue Jaeger, the once thought to be obsolete “Obsidian Fury.” Nate and Jake immediately believe Mako was not accidentally killed, and the two are determined to investigate further into this. What results is a film that, while not as ground-breaking and thrilling as the first, still holds its own due to a few impressive battle sequences.

“Pacific Rim: Uprising” comes to 4K UHD Blu-ray in the 2.40:1 aspect ratio, in full 2160p 4K with both HDR (HDR10) and Dolby Vision High Dynamic Range formats. According to the technical specifications on IMDb, the film was shot digitally using the Arri Alex XT Plus Camera at 2.8K and 3.4K resolution, and mastered in 2K. That being said this is an up-conversion to 4K, despite having higher quality source material.

Comparing this transfer to the included Blu-ray, the biggest area of improvement (not that the Blu-ray looked poor by any standards,) is in the finite detail. With this being an effects heavy film, detail is of the utmost importance. Whether it be a close up of a simple hair on a beard, or the wider shots of the huge terrains used throughout, detail impresses throughout the entire transfer. The larger Jaeger and Kaiju never falter in image quality, with only a few moments making the creature look a bit ‘off’ (in terms of CGI).

HDR-wise, this is a demo disc simply put. Skin tones are accurate, as are flesh tones. Black levels remain deep, dark and accurate. Brighter colors, like that of red blood, yellow sunshine, blues of Kaiju, whites of Siberia, on and on. HDR here just makes this a heck of a lot more visually fun to look at.

All in all, this is a demo worthy disc, just like the prior film (look for that review very soon – possibly within the week).

Audio quality on the 4K UHD Blu-ray is Dolby Atmos. Akin to that of some of my prior 4K UHD Blu-ray reviews, I’m going to focus on one particular sequence.

As one might expect, the final battle sequence is something to behold here. Just like the final encounter in the first “Pacific Rim“, the last fight is one of the best demos to date. If you simple move your head completely around during this, you will notice how well placed every little effect is. Everything is thrown at us, whether it be simple dialogue in the front, or crashing of a Jaeger in the surrounds. The film’s score also compliments this scene well, adding in a sense of urgency and heightened action. Truly great demo material here.

Simple others thing, like that of dialogue, is always well-produced with no instance of drop out. Surrounds, outside of the above aforementioned moment, are well placed never overwhelming the listener, but agreeing with what is occurring in the film. LFE is deep and immersive, particularly whenever these giant monsters walk. The boom of their footsteps create quite the low-end, with a solid ‘oomph’ to the mix.

All in all, just like the first film, another demo worthy mix.

Bonus Materials are actually on the 4K UHD Blu-ray Disc and the included Blu-ray. They are comprised of the following:

“Pacific Rim: Uprising“, while not as excellent as the original, is able to stand on its own due to a few downright impressive monster battles. Universal’s 4K UHD is another winner with demo worthy video and audio presentations, and a few solid bonus features. This is well recommended for fans of the film, as well as those looking for their new demo title to show off their home theater. 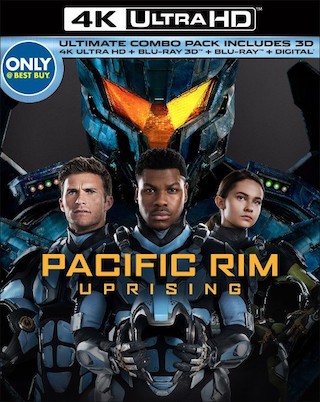