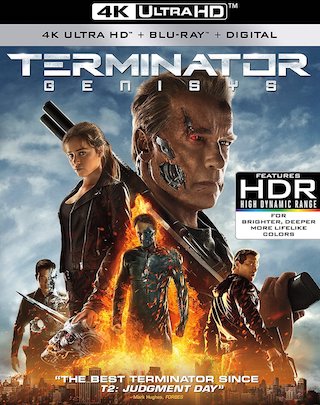 Editorial Note:
This review was co-wrote by:
Brendan Surpless and Justin Sluss 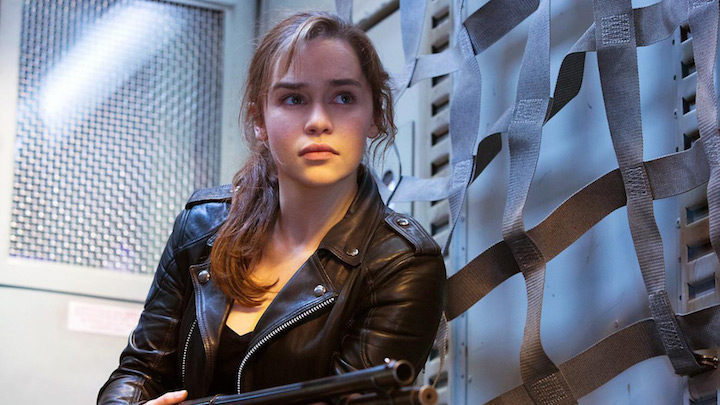 “Terminator: Genisys“, in what is now the 5th film in the “The Terminator” franchise, begins initially in the year 2029. “Skynet” has been destroyed by John Connor (Jason Clarke) and his Lieutenant Kyle Reese (Jai Courtney). Before the celebration can begin, we learn that Skynet, at the last moment, sent back a machine to ‘terminate’ Sarah Connor, in the year 1984. Kyle quickly volunteers to go back and protect Sarah. As he’s about to transport to the year 1984, John is attacked by something, thus alternating the timeline.

We arrive in 1984, to find the Terminator, from a scene directly from the original, classic film. Only difference is an older Terminator by the name of “Pops” (Arnold Schwarzengger) has been waiting for this 1984 Terminator for years. Along side Sarah Connor (Emilia Clarke), it’s now up to Reese and Sarah to figure out this alternate timeline, eventually traveling to the year 2017 to stop Skynet, now know as ‘Genisys.’

Ever since the 1st two “Terminator” films were released, any attempt at a newer film is instantly met with the ‘well, it’s not as good as the first two.’ While I’ll certainly agree with you on “Rise of the Machines” and, to a lesser degree, “Salvation,” what makes “Genisys” as enjoyable (for this guy) is that not only does the film harkens back to the original, but also adds in its own flavor. Director Alan Taylor (probably best known for the film “Thor: The Dark World”) directs this film with a sense of passion. He wants to show homage to the classic, but also mark his own path in the “Terminator” archives.

Criticism of the film seems to come with the fact that the film doesn’t have a strong cast. Perhaps because the consistently great Christian Bale played John Connor in “Salvation”, Jai Courtney‘s performance can come off as a bit bland. While I won’t 100% agree with that, Courtney holds his own, initially not trusting “Pops”, but slowly growing to accept him, for protecting Sarah in this alternate timeline. Taylor mixes the actors well into flashes of the first film and original Terminator lore. It’s aspects like this, the flashback of “Pops” showing up at Big Bear Lake, to a T-1000 being in 1984, that make “Genisys” well worth the price of admission.

“Terminator: Genisys” comes to 4K UHD Blu-ray in the 2.39:1 aspect ratio, in full 2160p 4K with both HDR (HDR10) and Dolby Vision High Dynamic Range formats. According to the technical specifications on IMDb this film was shot digitally using the Arri Alexa XT Plus camera at 2.8K and 3.4K resolution, and then mastered in 2K. So, technically this has been upscaled to 4K from its masters, despite its sources both being above 2K.

Having owned this film on Blu-ray, I decided to compare the two. Detail is much improved (not that the Blu-ray was a poor presentation by any means), particularly that of darker shadows. HDR (be it HDR10 or Dolby Vision) here helps to really make strong emphasis on the shadows and darker scenes in general. They come across more realistic in appearance now. As one might know, the initial opening moments, heck the first 10-15 minutes, are darker in nature. Luckily detail is never lost. Grays of the “Terminator” endoskeletons, reds of the laser beams, and the blacks of the muted, dark, dark world are near perfect. Brighter sequences, like that of the Golden Gate Bridge, are something to behold. Whites of the sky seem brighter and fleshtones appear to be more accurate than before.

This is a very nice improvement over the previous Blu-ray, and if it’s your first time experiencing the film (in 4K) you’re going to be pleased with it visually. That much we can say for certain. It’s not quite perfect, but it’s damn near close. Impressive 4K, even if it is slightly upscaled from the 2K master, despite its higher resolution digital sources. That being said, there is room for obvious improvement if they go back and do a true 4K master later down the line.

Audio quality on the 4K UHD Blu-ray is presented in the very same Dolby Atmos that you got on the previous Blu-ray Disc and Blu-ray 3D releases of the film. Don’t let that frighten you though, leave that to the mix actually kicking ass and holding up well.

The Dolby Atmos mix here had me 10 seconds in. No joke. I heard this roar of my subwoofer and this tiny bit of echo from the height speakers as the Paramount logo came up. This was a sign of things to come. It reminded me of hearing the “Transformers” mix for the first time on HD-DVD, the ill-fated format that fought Blu-ray in the format war. That was a title we often referred to as a “demo disc” for its amazing sound mix, eventually lossless when it came to Blu-ray. Long story short, this already had my expectations high, after that short little tiny opening title sequence intro alone.

Well, it didn’t take too long because at 2 minutes in roughly I heard the sound of a missile dropping from overheard through the height speakers and it sounded actually pretty damn scary. Nuclear missiles dropping on you from above will kinda of, I assume, scare the living shit out of you like that. So, yeah… I had to pause. I’m okay now, but wow! It creates both a scene in your mind and through the atmosphere at that point, through just the loud impending sound of a missile dropping on you from above and a Dolby Atmos surround mix. Then there was this loud even more ominous roar throughout the height speakers and front channels as the film’s title flashes by. It just worked on so many levels.

What’s cool is that was just a tiny little bit of a sample too. You’re in for a lot more than just that subtle not not so subtle use of the Atmos across the height speakers. The amount of LFE and rumble of the subwoofer adds to this audible fright as well, and will continue to throughout the film during action sequences, no different than this mentioned scene. It never once had the opening narration (dialogue) overwhelmed either, even as the nuclear missiles fell from overhead, and made impact. The dialogue is well-driven, with complete clarity, from the center channel speaker in the front.

This mix, not just as an Atmos mix, but as a surround mix too (for those on 7.1 or 5.1) really works well. It puts you right in the action in either configuration, but especially in the Atmos. It delivers. The first 11 minutes of this film in terms of audio is a straight up “demo sequence” from the very start. The amount of gunfire, explosions, and all are absolutely overwhelming in a very good way. This is one kick-ass Atmos mix. The musical here drives the film just as much as the action and I’m happy to say this does the musical score complete justice in the surround configuration. Most of the time the music will come from the front channels as well as some bit of rear channel presence as well. It’s an incredibly solid presentation in every aspect of sound. This is what a Dolby Atmos mix is supposed to sound like, and it’s why “Terminator: Genisys” on 4K UHD Blu-ray earns a perfect audio presentation. – J. Sluss 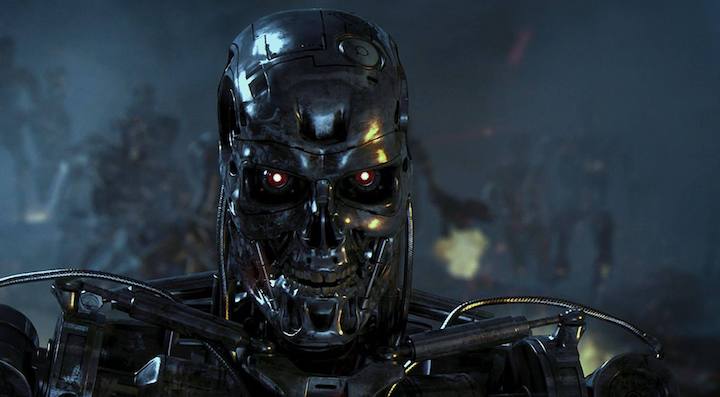 The 4K UHD Blu-ray Disc contains no bonus materials; however, there are both contents on the first Blu-ray and on an (previously exclusive) second Blu-ray (just of bonus materials), that had not ever released with the standard 2015 Blu-ray Disc. All of the  featurettes, on both discs, include Dolby Digital 2.0 Stereo sound – unless otherwise noted below.

“Terminator: Genisys” proved to be a breath of fresh air for “Terminator” fans, with the third, and fourth films really feeling stale. This film even got the recommendation of the creator, James Cameron, himself as you’ll see quoted on the back of the package art.

Overall, this is one powerful film in “The Terminator” franchise and packs one powerfully impressive presentation on 4K UHD Blu-ray, both in its visual 4K and its extremely intense Dolby Atmos mix.