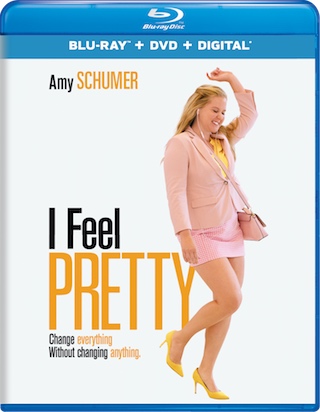 The 2018 comedy “I Feel Pretty” starring Amy Schumer is coming to Blu-ray Disc on July 17th via Universal Studios. Tech specs for the release include full 1080p HD in the 2.40:1 aspect ratio and DTS-HD 7.1 Master Audio sound. The Blu-ray Disc is available for PRE-ORDER over at Amazon. Bonus materials, slim as they are, set to be included on the release include: Deleted Scenes, Gag Reel and “Being Pretty” featurette. The release comes in a “combo pack” with a Blu-ray Disc, DVD and Digital Copy of the film included.

Universal City, California, May 24, 2018 – Renee’s life is changed forever when she accidentally slips and falls in the laugh-out-loud comedy, I Feel Pretty, arriving on Digital on July 3, 2018 and on Blu-rayTM, DVD and On Demand on July 17, 2018 from STXfilms and Universal Pictures Home Entertainment. Filled with heart and humor from beginning to end, I Feel Pretty on Blu-ray, DVD and Digital comes packed with exciting bonus features including deleted scenes, a gag reel and special featurette that take fans further into the hilarious and moving story.

Amy Schumer (Trainwreck, Snatched) stars as Renee, a woman who struggles with feelings of insecurity and inadequacy on a daily basis. After suffering a fall she wakes up believing she is suddenly the most beautiful and capable woman on the planet. With this new found confidence she is empowered to live her life fearlessly and flawlessly, but what will happen when she realizes her appearance never changed?