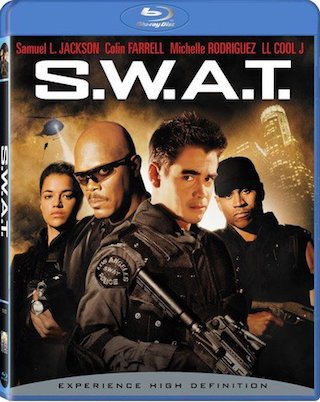 “S.W.A.T.” tells the story of a man named Jim Street (Daredevil’s Colin Farrell) and T.J. McCabe (Four Brothers‘ Josh Charles) who are the elite of the elite on Los Angeles Special Weapons and Tactics team. Everything is going smooth until McCabe, by accident, shoots a hostage while trying to prevent a bank robbery. Due to Street and McCabe both being present at the scene, both are demoted (Street to the gun cage and McCabe simply quits). Street continues his everyday job of gun cage duty until he catches the eye of Dan ‘Hondo’ Harrelson (Pulp Fiction’s Samuel L. Jackson), who has been brought here to put together a new S.W.A.T. team. Even though the current captain despises Street, Hondo convinces him to allow Street a chance to be on the team once again. To speed up this synopsis, Street gets on the team with a few other members.

The main point of the film is the plot revolving around international fugitive Alex Montel (Unfaithful’s Olivier Martinez) who is pulled over after a cop notices a broken taillight. Turns out that Alex has quite the bounty on his head resulting in him declaring, in front of TV cameras, “I’ll give $100 Million Dollars to anyone who can get me out of here.” This is where the film gets interesting as every crook tries to get Alex out of custody. What they didn’t know is that Alex wasn’t been watched by normal L.A.P.D. police officers, but rather by the L.A. S.W.A.T. team.

Something I first must mention here before I continue on, is that if anyone goes into this film expecting a brain-involving film, you’ll definitely come out mighty angry. There is a sole reason why films of this nature come out during the summer months, and that is because these types of films are solely made to attract people to the theater to see cars blow up, bullets fly, and people get killed. And these types of films usually are horrendously bad. I suppose there are a few reasons why S.W.A.T., despite following these criteria, actually works. First off, the cast works off each other in a funny manner (especially the constant bickering between Street and another officer over his sister). Secondly, the film contains a lot of noisy action scenes, most of which are done well (this is probably because of the director in Clark Johnson). Lastly, for some reason I might add, I enjoyed the character of Alex Montel and his sly remarks about American culture.

No, S.W.A.T. isn’t an Oscar caliber film, but it wasn’t made for that reason. It was made for those people who like to enjoy themselves watching popcorn type flicks. If you’re willing to shut off your brain a little around two hours, then S.W.A.T. is just your calling.

The film’s print, being made in 2003, is in fine condition boasting clean, bright imagery, which all but helps to capture the initial bank robbery. However, despite the image and print being pretty clean, there are a few imperfections I must mention. Grain, albeit not being overly annoying, was still present. Colors are bright and loud (loud in terms of coming off the screen at you), but seemed kind of washed out in a few sequences (I noticed this in the background water gun fight between Street and some kids). Detail is rock solid for the most part (especially in the shooting cards scene).

Some people are quick to blame Sony for using the MPEG-2 video codec compressions, which tends to be more space hungry, and I agree with them here. Sony was obviously lost on this codec and has since (as of today 10/16/06) decided to switch to the less space hunger, superior VC-1 video codec that has been used on a majority of HD-DVD releases thus far. Despite this problem, S.W.A.T. still, in the world of numerous faulty, early releases from Sony, looks fine.

Ah, the perfect example of what can sound good. Boasting the standard English PCM 5.1 Surround, S.W.A.T., as per the typical action film, sounds awesome with numerous scenes that, literally, blast your socks off.

The brightest part of this audio experience, is the use of surrounds and sound effects. Little things like bullets zip by our heads, while continuous car crashes in the bank sequence, pound our ears (not in a bad way I might add). And with all these loud sequences, dynamic range never falters or sounds off key resulting in the viewer never having to raise or lower the volume once they’ve found that preferred area on their receiver. You never struggle to hear dialogue as it was well placed a film with this much robust, loud action.

I’m not quite sure if S.W.A.T. is a demo-worthy audio disc for Blu-Ray owners, but it sure does pack quite the whallop for all your audio enthusiasts out there.

Sadly, this is the area where the disc really falls to the ground lie a drunken person.

As I finished this film, I was thinking to myself that this would warrant the easy purchase recommendation as the film had great, if imperfect video, and banging audio. However, the extreme lack of real concrete features (honestly where the Deleted Scenes from the packed initial SD-DVD really the best feature?), really hurts this package badly. Due to this, I can only recommend this for a rental.