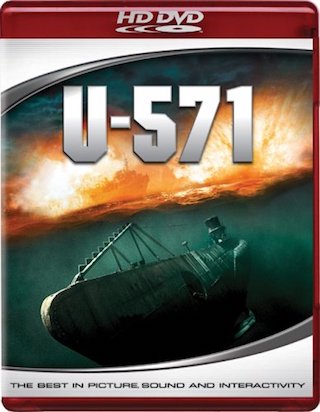 Director Jonathan Mostow is an interesting director to say the least. He directed Kurt Russell is the great Breakdown where a man must fight to save his wife. He director Arnold Schwarzenegger in the third Terminator film where a machine must fight another machine to help save the human race; but before he made Terminator 3, he directed Matthew McConaughey and Bill Paxton in a film where men must fight against their wits to save themselves. Two of the three films are great and are a joy to watch, while one is enjoyable to watch, but that is about it.

In U-571, Lt. Tyler (Matthew McConaughey) stars as a young man who wants nothing better than to jump into the command line. His commander, Lt. Commander Dahlgren (Bill Paxton) doesn’t see this though. Tyler isn’t experienced enough and isn’t ready to sacrifice the lives of his men for the lives of others or, more importantly, the safety of the mission at hand. This creates some heat between the two, but all that is quickly put aside when they’re called back to the boat. We soon learn that a German U-boat has become disabled in the middle of the Atlantic. On board this U-boat is a secret Enigma machine, which can be used to cipher messages. This exact Enigma machine was used by the Nazi’s to control all of their shipping lanes.

Tyler and his men must disguise their U-boat as a Nazi vessel so they can get to the sub before the Germans do. Oh, but the fun continues for them. They must also impersonate Germans, capture the sub with a boarding party, grab this Enigma device and then successful sink the boat so that no one will suspect anything happened. The basic plot to the film was an interesting plot, but the idea of a man like Tyler, in less than a week I might add, training all his men so they can fight, seems rather odd and unlikely. He obviously informs his men that he’ll train them, but we never see one training scene. I guess we’re to assume that the men were all successfully trained with absolutely zero problems.

As a war film, U-571 is enjoyable, but is completely dumb and cheesy; so cheesy that if you don’t shut off your brain before the film begins, you may actually come out with a headache. While I did enjoy Mostow’s T3, U-571 is not as enjoyable mostly because Mostow and his crew relied on numerous action scenes, which is good if the prime audience just wants to demo this disc, instead of a few more plausible scenes that would help the story and the characters more.

I remember reading that Mostow and his crew purposely decided to abandon any type of plausibility that films like The Hunt for Red October and Das Boot had in exchange for a film that action diehards would love. While I did enjoy action films as much as the next person, I found the film to be enjoyable on a certain level. The action scenes are too numerous, but the part that I enjoyed the most relied on the acting skills of McConaughey and Paxton. Both displayed the necessary hatred toward each other when Tyler wanted to step up but Dahlgren wouldn’t let him. But when the time came to act, both men displayed the correct friendship toward each other. The acting is certaintly not awarding winning material, but it was one of the few parts of the film, with a few action scenes, that saved the film from being a complete and utter disaster.

U-571 is a completely dumb film. But it’s a dumb film that you watch when you want to demo off your equipment or just simply would like to watch a stupid film after a long day. If you want a more serious submarine film, I shouldn’t have to list any examples, as they are easy to figure out. Mostow, if his goal was to make a dumb action film, succeeded as U-571 is so dumb and cheesy that it works for the most part. It’s not necessarily a film that I would go around praising and cheering for, but would recommend for those who like stupid action films with big explosions and rocking sound.

For Universal, U-571 has always seemed to be the film they’ve relied on to demo a new format. As one of the first discs to arrive on DVD, D-VHS and now HD-DVD, it’s completely understandable why Universal relies on U-571 at the level they do. The film looks absolutely terrific. The standard 2:35:1 Widescreen Transfer is one of the best-looking transfers to hit HD-DVD thus far. Colors are as defined as they could be considering the subject matter and the constant dark scenery. The setting of the film, mostly on the ocean, is brought out in superb style. The water looks amazingly real and is so shiny, I stopped for a minute and could almost imagine the water in front of me. If and when Blu-Ray hits the market, and if Universal decides to support Blu-Ray, don’t be surprised if U-571 is one of their first titles.

Boom and zoom! What an audio track Universal has provided us with. The standard Dolby Digital Plus 5.1 Track sounds amazing. Since the original DVD and D-VHS releases had a well-rounded audio track, Universal has decided, some how, to up the ante even more. Little effects like the sonar pinging sound great, while bigger effects like the sub moving through the water, sounds equally great. The bass levels, while sometimes a bit too loud, were fine as well. Take some scenes where it sounded like the sub was moving so rapidly and fast, that it sounded like the sub was going to explode. What a feeling! Dialogue, while being clear and simple, was drowned out in some scenes. Now this wasn’t a super negative aspect, but it did require me to turn up the volume a lot in some scenes. This resulted in myself constantly adjusting the volume. Still, if this doesn’t really bother you, U-571 is certainly a demo-worthy release.

U-571 is definitely not as good as some recent submarine films, but the acting in the film, along with a few action scenes, help make the film better than it probably is. The video and audio for the HD-DVD release is downright phenomenal and is demo-worthy. Unfortunately, we have no new features, which is a huge shame. If you’re a audiophile or videophile, I recommend picking up U-571 as the video and audio are great. If you’re not a audiophile or videophile, I recommend giving this film a rental.