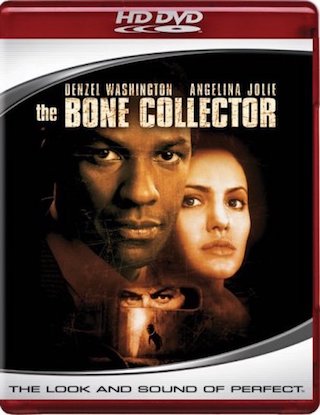 The Bone Collector tells the story of a man named Lincoln Rhyme, portrayed by Denzel Washington. Lincoln has been confined to his Manhattan bed due to being injured on his job by a falling beam. Lincoln has since become a Quadriplegic who simply wants to kill himself. His nurse, portrayed by Queen Latifah, is planning on assisting him in his suicide. As he is planning this, Lincoln learns of a serial killer who has been abducting random people, throwing them in a taxi and proceeding to torture them in extremely gruesome manners. Lincoln recruits Amelia Donaghy, portrayed by Angelina Jolie. Amelia is one of the first on the scene of a quite a horrible murder. The murder scene features a man buried in gravel only showing a hand with each finger showing something different. Right after this scene, one can easily realize that this killer in question is quite the different type of killer as he doesn’t necessarily kill his victims and leave a simple gun shot. Instead this killer tends to leave little hints and clues almost painting a canvas with the person he just killed.

Due to the serial killer film series really being brought to a new level via 1991’s The Silence of the Lambs (especially in relevance to the power of the story, direction, score, and acting), this film doesn’t really bring anything new to the table, which is not necessarily a bad thing. The Bone Collector takes what is normal about serial killer films like standard plot ideas, characters and situations. This does tend to make the film lose a lot of replay value, but The Bone Collector is not as bad as one may think mainly because of the actors involved. For some reason I always find myself enjoying Denzel Washington’s performances, regardless if what he’s performing in is rather weak. He always seems to bring a higher level of skill and quality to his films. Relatively unknown at this point, Angelina Jolie definitely had the makings of a star. Granted since this film she’s had some weaker roles in films like Tomb Radier, but she still manages to do what she can with a film. I found it interesting how Washington, who was a bigger star at this time, spends the entire film kind of on the sidelines with Jolie doing a majority of the acting. I wonder if Director Philip Noyce realized early on that Jolie was going to be big eventually? Did he want to showcase something he already knew? Enough on this though.

In the end, The Bone Collector is a decent way to spend a movie night. Just don’t expect too much revelation on the serial killer film. Just expect above average acting from all hands on deck, especially Jolie. Shut off your brain and you’ll find yourself enjoying the film enough.

The Bone Collector is presented in a rather unimpressive 1080p 2:35:1 Widescreen Aspect Ratio. Grain seems to be the biggest issue with this inconsistent transfer. Some of the film’s opening chapters (chapter 4 and 5) show a lot of washed out colors. My biggest issue here is that the film came out on SD DVD in 2000 making me wonder if Universal just ported over this transfer instead of touching up the picture. There are numerous scenes, particularly some of the scenes where there is a lot of movement on the screen, that show a lot of noise and pixelation on the screen. Granted this transfer is better than most SD DVD transfers, but I expected a bit more considering Universal has put out some of the strongest titles thus far. The Bone Collector is a good transfer, but nothing amazing.

Similar to the video transfer here, the presented Dolby Digital Plus 5.1 gets the job done, but never seems to raise itself to a point where you would want to demo the material off to your friends. The biggest issue here is that some of the action scenes were so loud that you had to lower the volume only to find yourself having to raise the volume shortly after just to hear the dialogue being spoken. Even though this issue is present, I will admit that the track tries to develop itself into a position where it could have been impressive. Rears try to consistently give us something, particularly in the train sequence, great, but they never seem to quite get there. The fronts, however, do a better job completing that dynamic range giving us a more natural sound. I really question Universal on this one. Why would you release a film like this on a format like this if you didn’t really work on the V/A quality?

Out of all the massive titles in Universal’s catalog, I’m still wondering why they chose the semi-successful Bone Collector as one of their initial titles. While the transfer is slightly improved over the SD DVD transfer, it still lacked the overall spark necessary for HD-DVD. With slightly upgraded picture, no new features (and only 2 to boot), I can only recommend this for a Saturday night rental.