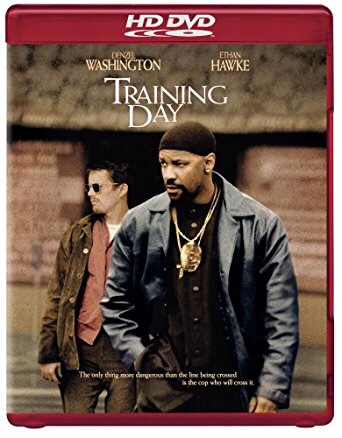 Training Day stars Academy Award Winning Actor Denzel Washington in the role of Alonzo Harris. Harris, who is one of the meanest, baddest cops in the city of LA, is a person who cruises the streets in his customized Caddy. Harris, in one of the film’s opening scenes, meets Jake Hoyt (Ethan Hawke), a young cop whose dream is to be promoted to the elite narc squad. Naturally, this is Jake’s first day of training and he is thrown into the arms of Harris. Alonzo tries to show him the streets so he can understand everything. He has Jake smoke pot just because he can. In one interesting scene, possibly Alonzo being a tough ass to Jake, doesn’t arrest two rapists like Jake wants to, but, instead, proceeds to beat the living crap out of them.

For Alonzo, acting the way he does is simply because this is the way Alonzo feels he should act. As he tells Jake in one scene “If you turn down gifts on the street, you’ll be dead.” Jake, who has just learned his pot has been laced with PCP, has just awoken to find out that he is now involved with a raid on a drug dealer’s house. Alonzo continues to take Jake on these various trips, which all seem to be teaching Jake more and more about the type of cop Alonzo truly is. It makes me wonder if all LA cops are truly this evil, not necessarily as a poke at LA and the crime, but possibly a look into the corruption of the cop field in itself.

For Denzel Washington, Training Day sees him venture into that rare villain role, a role he is not too use to. Director Antoine Fuqua (Tears of the Sun) keeps on pressing every little possible button Alonzo has inside of him just to see what type of character Alonzo truly is and to see what makes him really tick inside. Alonzo, toward the beginning, seems like the cop everyone fears because they can’t stand up to him. Washington is completely dazzling in the role, certainly deserving his Oscar. It is quite the odd feeling that whatever role Washington gets himself into, audiences are almost guaranteed a dynamite performance.

Training Day, as a film, is great simply because, as I’ve mentioned a few times before, of Washington’s all-star performance. He brings out the intensity in Alonzo Harris that few could have. Training Day is a film that is well worth your time, despite the possibly questioning ending, as the film is an effective, crafty thriller.

The original DVD release of Training Day saw a transfer, as I looked back on my copy, that was filled with a few blurry colors, and a few grainy spots where, it seemed, the transfer was not completely touched up. As per many recent HD-DVD releases, the image quality is taken one step further. Colors are much deeper, darker, and more defining while the overall print of the film is nearly flawless. The aforementioned grain, while still not completely gone, is not as noticeable with the picture revealing a more positive result instead of the negatives the previous release had. It is quite funny as this film marks my seventh review of the HD-DVD format. Not really having experienced HD before this (I had an HD box at one point but didn’t really enjoy it since a majority of my favorite shows weren’t broadcasted in HD at the time period), I will now say that after watching a handful of films in the glorious HD quality, it is making me want to get this HD box once more that way I can experience HD at all times. What a pleasant transfer this film had.

The defining matter for HD audio is the Dolby Digital Plus 5.1 Audio Tracks, which are naturally present on this disc. Since this film has enough action, the dynamics were clear and clean from booming gun shots from the rear, screeching cars blasting hip-hop and pristine dialogue from the forefront. If this is definitely a sign of how HD handles a moderate action film like Training Day, I can wait to see film’s like The Matrix.

As per the usual HD-DVD release, all the features that were found on the previous DVD release are found here once more.

Having always enjoyed Training Day, mostly because of the acting by Washington, I was intrigued to look into this HD-DVD release. The end result is the film is still of the same quality, but the image and audio quality were really cleaned up helping HD earn their place in the entertainment market. While the features were the same as the previous release, if you’re into the HD feast like some, Training Day is a worthwhile title to add to your new collection.