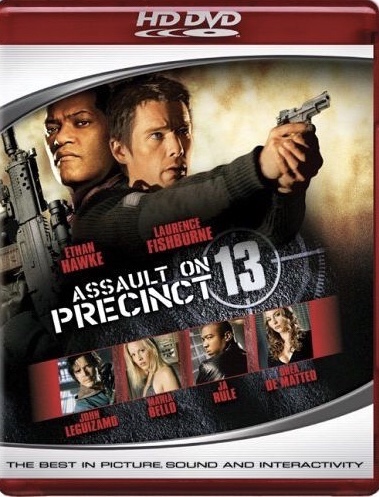 The 2005 Version of Assault on Precinct 13 is an obvious remake of John Carpenter’s 1976 classic. Precinct, for Carpenter, was one of his first films made before his ultra famous Halloween. But if anyone has seen the 1976 version, you can easily know what will come from the 2005 version. Instead of making a possible change to the 2005 version, Director Jean-Francois Richet decided to use the similar theme of a police station being abandoned that Carpenter did. Instead though, Richet focuses on the corrupt possibilities of the police. What Richet brings to the table is a few impressive action scenes, a lot of gorgeous snow (especially so in HD), and a few great actors. All this is very impressive considering the low $20 million dollar budget the film had.

In this version of Precinct, the jail is scheduled to close forever at midnight. Burnt-out desk sergeant Jake Fornick (Training Day’s Ethan Hawke) still traumatized by the death of two partners, is on the graveyard shift with old-timer Jasper O’Shea (TV’s The West Wing) announces he will soon retire. Jake just tends to sit around popping bottles of pills trying to overcome his this pain in his life. That is until some terror arrives. Bishop (The Matrix Trilogy’s Laurence Fishburne) has been arrested and is being transported along with Beck (Empire’s John Leguizamo) and a few others including a character played by rapper Ja Rule. Everything seems to be going fine until a big accident blocks the highway to the jail. So, to get these criminals off their backs, the guards decide to dump Bishop and the select others off at Precinct 13. Unfortunately, the guards didn’t know that Bishop’s men are determined to set him free.

Jake must pull himself out of his pain to guard this prison. So this is the part where people may wonder why he doesn’t simply call the police. Well, due to the terrible weather outside, none of the phones or communication devices inside the prison, are working. Pretty convenient no?

The few things the film gets right are simply the action scenes. Richet could have easily made every action scene over-the-top, but instead he makes a majority of the action scenes seem like something we might almost believe. Just like Carpenter was successful in creating a few tense scenes in the 1976 version, Richet is successful in doing the same, however, in not as stylish a manner. The action scenes all made sense in Carpenter’s version, but some, not many luckily, seemed a bit out of place.

What separates this from being an excellent remake are little things that most people wouldn’t hold against a film. Things like tunnels appearing out of nowhere (tunnels seem to always conveniently appear when needed), forests lurking outside the prison when before they were never there. I do suppose that I am being too harsh, but a smart action film, like Carpenter’s 1976 version, doesn’t have to do this. As remakes go, Assault on Precinct 13 is not the best remake, but it certainly is not the worst.

The HD-DVD transfer for Precinct is pretty sharp looking in that colors are near perfect (for an example, take a look at the white, beautiful snow in some scenes). Considering the source print for Precinct is only one year old, one should not expect to see items like dirt, grain, or any type of print damage. Luckily for us we don’t have any real problems accept some of the darker colors, particularly the color black, look overall flat. This gives the viewer a rather tough situation when it comes to making out some of the scenery, especially considering the film’s darker locale of a prison. While the HD-DVD picture is nothing to write home about, the picture truly shows the hopefully capabilities of what HD-DVD can, hopefully, eventually bring us.

Precinct is given the standard Dolby Digital Plus 5.1 Audio Track, but also is given a DTS track. The film, mostly due to its’ action nature, sounds great. Gunfire zips past us in all directions, the subwoofer pounds thanks to the film’s numerous explosions, and the dialogue was ever so clear. However, even though the audio does its’ job, the provided tracks don’t seem to be something that would belong on an HD-DVD disc. Don’t get me wrong though, the tracks sound fine, but they just seem to be missing that overall ‘demo’ worthy ring. I do hope that as more and more releases are made available in this HD-DVD format, more and more studios will start trying to implement the Dolby TrueHD audio.

I always wonder why Universal is releasing film’s like Precinct on HD-DVD when they have better action film’s like The Mummy sitting around. While the actual remake is good enough for a rental, slightly upgraded picture and audio, with no new features, doesn’t translate into a purchase.