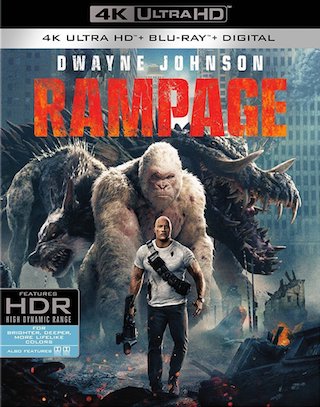 Warner Brothers has officially announced plans to bring the 2018 Brad Peyton directed film “Rampage” (based on the video game of the same title) starring Dwayne Johnson to 4K UHD Blu-ray, Blu-ray Disc, and Blu-ray 3D on July 17th. Tech specs for the 4K UHD Blu-ray include full 2160p 4K in the 2.4:1 aspect ratio with both HDR options of Dolby Vision and HDR10, as well as includes both Dolby Atmos and DTS-HD 5.1 MA sound mixes. The Blu-ray and Blu-ray 3D releases include full 1080p in the 2.4:1 aspect ratio with both Dolby Atmos and DTS-HD 5.1 MA sound as well. All versions will include a digital copy of the film.

Bonus materials set to be included on the release(s) are listed below: