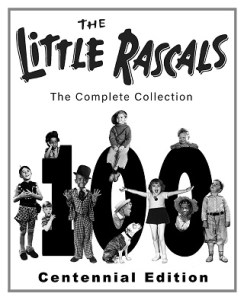 “The Little Rascals: The Complete Collection (Centennial Edition)” is officially coming to Blu-ray Disc on November 15th via ClassicFlix.  This will include all six volumes [previously released] of the classic shorts, for a total of 80 sound short films spanning across a 7-disc set.  These shorts have been restored and you can find some info about that below.

“About the restorations: Each short has been newly scanned from original Hal Roach 35mm film elements. Remastered, uncut and beautifully restored, now you can see The Little Rascals like never before. With restorations so glorious, it will be like watching these iconic shorts for the first time!”

The tech specs include 1080p HD video presentation in the 1.37:1 (4×3 full frame) aspect ratio with DTS-HD Master Audio 2.0 Mono lossless Mono sound, and each Blu-ray volume [out of six total] will be on BD-50 discs.  The bonus disc will be on a BD-25.  You can now find The Complete Collection Blu-ray set available for preorder over at Amazon as well as directly from the ClassicFix.com website.  Speaking of ClassicFlix’s website, you there can also preorder an exclusive bonus disc found in this set if you have previously purchased volumes 1-6 of their Blu-ray releases.  That “Centennial” bonus disc will include the following extras.