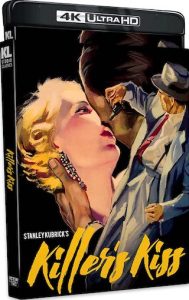 This comes from a new 4K scan, as noted here: “Brand New Dolby Vision HDR Master – From 4K Scan of the Original Camera Negative.”  The tech specs include a 2160p video presentation in Black & White in the 1.33:1 aspect ratio with HDR10 and Dolby Vision forms of high dynamic range and uncompressed or lossless Mono sound.  Judging from the cover artwork (pictured above) this release appears it will not come in the form of a “combo pack” and will only include the 4K disc of the film.  It also is noted to be a 1-disc set on preorder listings.

You can now find the 4K UHD Blu-ray available for preorder over at Amazon and directly via Kino Lorber‘s website.   The bonus materials set to be included with the release are listed below.