1944 Billy Wilder film Double Indemnity on 4K in May 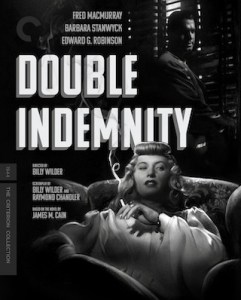 The 1944 film noir “Double Indemnity” is officially coming to 4K UHD Blu-ray and Blu-ray Disc on May 31st via The Criterion Collection.  The film, directed and co-written by Billy Wilder, starred Fred MacMurray, Barbara Stanwyck, and Edward G. Robinson.

This release comes from a new 4K restoration.  The tech specs for the 4K UHD Blu-ray include a 2160p Black & White video presentation in the 1.37:1 aspect ratio with Dolby Vision and HDR10 forms of high dynamic range and an uncompressed LPCM Mono sound mix.  Tech specs for the Blu-ray include a 1080p HD Black & White video presentation in the 1.37:1 aspect ratio and LPCM Mono sound.  The 4K release will come in the form of a “combo pack” with its Blu-ray Disc counterpart included.  You can now find the 4K UHD Blu-ray and the Blu-ray from Criterion available for preorder over at Amazon.