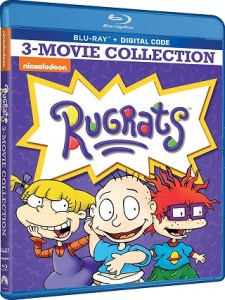 There will be a “Rugrats 3-Movie Collection“ coming to Blu-ray Disc on March 8th via Nickelodeon and Paramount Home Entertainment.  The collection will include the following three films:

The are no specific tech specs for the films have yet but it will be spanning across a 3-disc set where each film will definitely be presented in 1080p HD video quality and presumably with a lossless sound mix for each film. Also, there have been no bonus materials yet mentioned to be included, but I’ll try to get further from Paramount soon, so stay tuned for a possible update on all of those specifics to the release itself.

NOTE:  This will make the Blu-ray debut for each of these three films, as they’ve never been released on the format before — only on DVD.

Finally, you can find the Blu-ray set is now available for preorder over at Amazon.  I’m not sure why Amazon lists it with a different title but I’m going with what the artwork and the production description (below) suggest.

The biggest babies in the entertainment business land on Blu-ray in this remastered collection of their three big-screen, blockbuster adventures. The fun begins with THE RUGRATS MOVIE, based on the popular Nickelodeon series, and featuring an all-star celebrity cast alongside Tommy Pickles and his entire troupe of toddlers. In THE RUGRATS IN PARIS, Chuckie brings his pals to Europe, where they visit the City of Lights for one adventure after another. In the third movie, THE RUGRATS GO WILD, a family vacation takes an exotic detour. As the babies race wildly across the jungle, they soon discover another family on an adventure of their own—the Wild Thornberrys.

As an Amazon Associate, I earned a slight percentage of a commission on qualified sales over at Amazon