The Mechanic with Charles Bronson on Blu-ray in May 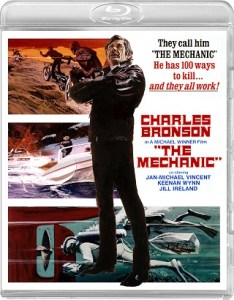 The 1972 film “The Mechanic“ starring Charles Bronson will be getting a “Special Edition” Blu-ray release on May 10th via Ronin Flix.  The film, directed by Michael Winner, co-starred Jan-Michael Vincent, Keenan Wynn, Jill Ireland, and Frank DeKova.  This will mark only the second time this film has been available on the Blu-ray format since back in 2014 via a release which is now OOP [Out Of Print].

The movie has received a new 2K scan from the interpositive and is presented in 1080p HD video in the 1.78:1 aspect ratio with DTS-HD Master Audio 2.0 Stereo lossless sound.  You can now find the Special Edition Blu-ray available for preorder over at Amazon.  The bonus materials set to be included with this release are listed below.