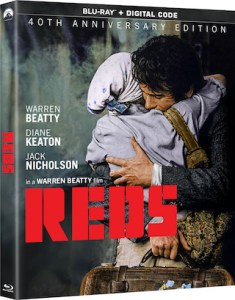 HOLLYWOOD, Calif. – Directed, co-written, produced by and starring Warren Beatty, the masterful political and historical epic REDS celebrates its 40th anniversary this year.  The story of a radical American journalist embroiled in the Bolshevik revolution mesmerized critics and audiences alike and remains as relevant today as when it was originally released on December 25, 1981.

On November 30, 2021, Paramount Home Entertainment will debut a new two-disc Blu-ray set of REDS, newly restored under Beatty’s supervision.  The film was restored and remastered from the original negative in 4K with High Dynamic Range using a vintage print from the Paramount archives as a reference, which was approved by Academy Award®-winning* cinematographer Vittorio Storaro.

Punctuated by interviews with real-life activists and witnesses to the revolution, REDS became an instant classic, transcending time with its eternal tale of human passion, conviction, and frailty.  In addition to Beatty, the film boasts an outstanding cast including Diane Keaton, Jack Nicholson, Edward Herrmann, Gene Hackman, Paul Sorvino, and Maureen Stapleton, whose performance won her an Academy Award® for Best Actress in a Supporting Role.

The engrossing depiction of the love story between activists John Reed (Beatty) and Louise Bryant (Keaton) set against the outbreak of World War I and the rise of communism in Russia, REDS garnered 12 Academy Award® nominations and won three**, including Best Director for Beatty, who also took home every other major directorial award of the season.  The Oscar®-nominated screenplay was written by Beatty and Trevor Griffiths.

The new Blu-ray set boasts over an hour of legacy bonus content, as well as access to a Digital copy of the film.  Bonus content is detailed below: