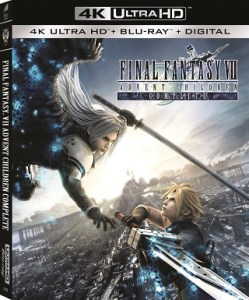 The 2005 CG animated film “Final Fantasy VII: Advent Children” in its “Complete” form is officially coming to 4K UHD Blu-ray on June 8th via Sony Pictures Home Entertainment. The film, based on the video game (“Final Fantasy VII”) created by Square / Square Enix, was co-directed by Tetsuya Nomura and Takeshi Nozue. The film has been newly remastered in 4K. The tech specs for this 4K release include a 2160p presentation in the 1.78:1 aspect ratio with HDR10 form of high dynamic range and Dolby Atmos sound — in both English and Japanese options. In addition to the new Dolby Atmos, this release will also include the original DTS-HD Master Audio 5.1 lossless surround sound mix in both English and Japanese. This release will come in the form of a “combo pack” with its Blu-ray Disc counterpart and a digital code (copy) of the film included. You can now find the 4K UHD Blu-ray listed for preorder over at Amazon. The bonus materials for the release, featured on the Blu-ray Disc, are listed below.

Further below, after the break, you can find the full announcement about the 4K release of this film.

Two years have passed since peace was won, and the ruins of Midgar stand as a testament to the sacrifices made to win that battle. But when a mysterious illness is linked to an insidious plot to resurrect an old enemy, Cloud must choose between the life of solitude he committed to or taking up the sword once more to save the planet he so loves. Featuring an extended director’s cut containing 26 minutes of explosive additional footage and over 1,000 revised scenes, FINAL FANTASY VII: ADVENT CHILDREN COMPLETE is a senses-shattering CGI sci-fi adventure you can’t afford to miss!