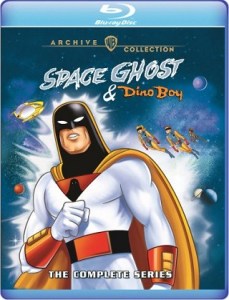 The 1966 TV show “Space Ghost & Dino Boy: The Complete Series“ is officially coming to Blu-ray Disc on October 13th via Warner Archive. The show, created by Alex Toth, ran from 1966 through 1968 for a total of 20 episodes. Space Ghost & Dino Boy featured the voice talent of Gary Owens (as “Space Ghost”), amongst others. The tech specs for the Blu-ray include a 1080p HD video presentation in the 1.33:1 aspect ratio with a Mono sound mix (likely in DTS-HD Master Audio, although not specified). The release will span across two BD-50 (50 gigabytes) Blu-ray Discs.

UPDATE: the Blu-ray is now available for preorder over at Amazon.

Bonus material will include the following listed below.