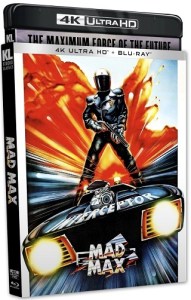 UPDATE: The tech specs for the release have now been unveiled. The 4K presentation will come with both HDR10 and Dolby Vision forms of High Dynamic Range. There will be Australian 5.1 and 2.0 lossless Mono sound mixes, as well as U.S. English dubbed 2.0 lossless Mono audio. This release will be presented on a BD100 (100 gigabytes) disc. You can now find the 4K UHD Blu-ray listed for preorder over at Amazon. Bonus materials set to be included on the release are detailed below.

UPDATE: KL Studio Classics has just announced they will be adding the following 30-minute interview with the film’s director George Miller, listed above as the last feature on Disc 2.

EDITORIAL NOTE: This marks the second 4K UHD Blu-ray release from the folks at KL Studio Classics, with the first being “Hannibal“ that they released last year. That turned out to be one amazing 4K release and one can certainly expect that this will be as well. I’m honestly very glad to see this distributor announcing yet another 4K release. In fact, in regards to 4K UHD Blu-ray, they also tweeted another tweet as well as hinting at a 2021 release for yet another film: Michel Gondry‘s “Eternal Sunshine of the Spotless Mind“ (2004) — featuring a new 4K restoration. No specific release date or details yet regarding that film but it’s just great to see that Kino Lorber is embracing the 4K physical format.