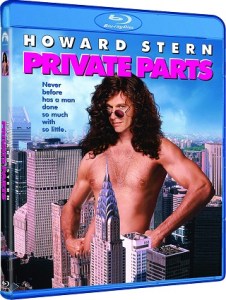 The 1997 film “Private Parts“ starring Howard Stern is finally coming to the Blu-ray Disc format on September 15th, via Paramount. The Betty Thomas directed film, an adaptation of the novel of the same title about the shock jock radio host’s life, featured him playing himself, along with a cast of (co-host) Robin Quivers, Fred Norris, Jackie Martling, Gary Dell’Abate, Mary McCormack, and Paul Giamatti. Tech specs for the release include a 1080p HD video presentation in the original 1.85:1 aspect ratio and DTS-HD Master Audio 5.1 sound. You can now find the Blu-ray available for preorder over at Amazon and retailer Best Buy. No bonus materials are set to be included with the release, according to the back package art.