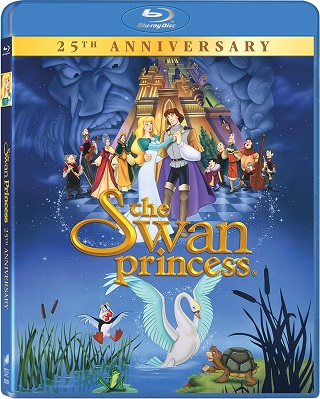 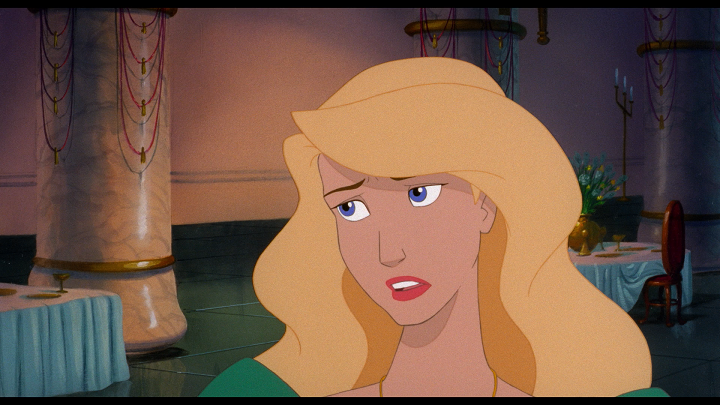 “The Swan Princess” was a 1994 animated film directed and produced by Richard Rich. Rich originally started out working at Walt Disney Studios in animation. He would later direct and co-direct two feature-length films for Disney with The Fox and the Hound (1981) and The Black Cauldron (1985). It’s certainly worth noting that he also co-directed Mickey’s Christmas Carol (1983) but wasn’t credited.

The main story here, based on the fairy tale Swan Lake, was adapted by Richard Rich and Brian Nissen. Nissen would go on to write the screenplay adaptation for the film. Our tale here involves a sorcerer, practicing dark magic, named “Lord Rothbart” (Jack Palance) who plans to take over a kingdom. Meanwhile, a young “Princess Odette” (Michelle Nicastro) is starting to finally get eyes for her childhood friend “Prince Derek” (Howard McGillin). This is all fine, as their parents had been hoping they would someday marry since they were just young children. Odette’s father “King William” (Dakin Matthews) and Derek’s mother “Queen Uberta” (Sandy Duncan) are very excited to see the two starting to have romantic interests in one another.

This storybook tale might seem all too good to be true, that’s because it is. The one problem here involves that sorcerer planning to take over King William’s kingdom. He is caught trying to do so but in the process, he manages to cast a spell on the young princess turning her into a swan. There’s a slight bit of a catch to that spell though and it involves her being able to become her human-self only under moonlight. Along the way living as a swan, Odette manages to make some animal friends like a frog named “Jean-Bob” (John Cleese), a turtle named “Speed” (Steven Wright), and a bird named “Puffin” (Steve Vinovich).

Will our Swan Princess Odette ever break the spell and be able to reunite with her true love Prince Derek? Or will she just kiss the frog (Jean-Bob) and be amazed to find he actually turns into a much more attractive prince? I’m kidding, of course, but you’ll have to watch the film to find out what happens. I have always found this film to be pretty good and certainly any fan of animation will know of it, for some rightful reasons. 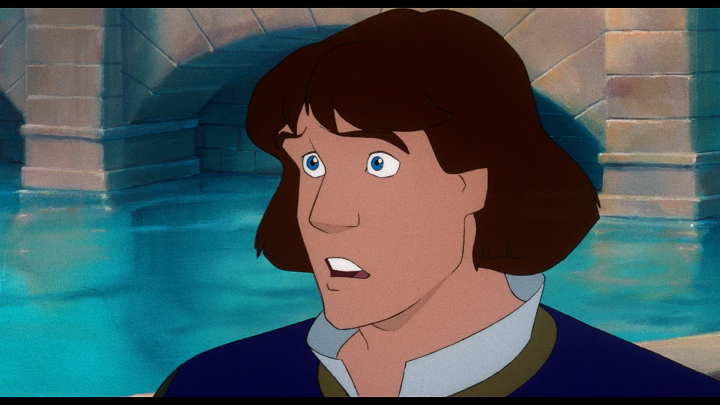 The colors are pretty vibrant here and the outlines (comprised of blacks or dark grays), as thin as they may be, are represented well enough (in the art style) to give the animation a pretty nice sharp visual presentation. The color timing seems to be correct and the black level here is solid.

There are some obvious visual imperfections here from the original film print of where this was scanned after the animation was shot. These visual imperfections can be simple things on the primary objects moving in the foreground of a frame of animation. This can be very minimal and isn’t really all that noticeable when it’s only the painting on cells of animation that make up each frame of the motion to create an animated film. These subtle little things left in are (in my opinion) nice to see for the purists out there, as they’ll get as close to the original theatrical presentation on film as they can.

That said, it’s not just visual imperfections to take into consideration here. There are some occasional rough animated scenes that come along, every so little as they do they are admittedly noticeable – to most anyone. Hand-drawn cel-animated films are no longer made these days, with everything now digital, and it was made 25 years ago. This holds up rather well in high definition and shows off a lot more detail than you ever saw on DVD.

Still, this animated film, with hand-drawn cel animation original style to it, is pretty captivating to finally see in HD now with this 25th Anniversary edition Blu-ray. It earns an impressive 4.5 rating for video quality. 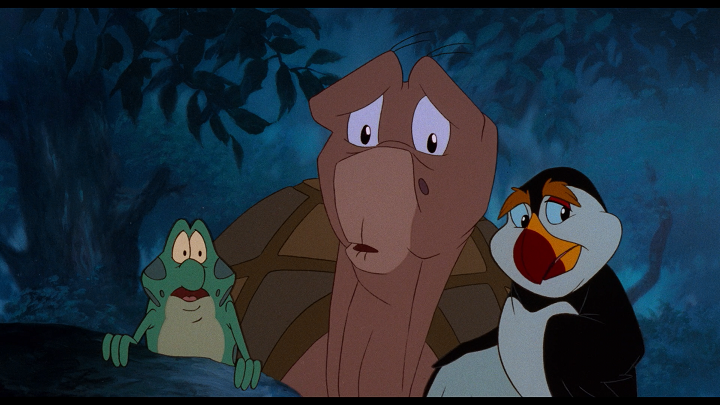 “The Swan Princess” is presented in the options of either DTS-HD 7.1 Master Audio or DTS-HD 5.1 Master Audio on the Blu-ray. I have to say I found this itself rather impressive that we got a choice of 7.1 and 5.1 lossless mixes in the very same audio format. Not everyone is on a 7.1 system and a specifically made for 5.1 mix sounds much better for anyone just on a 5.1 system. Now, with that out of the way, I’ll continue.

There’s a very nice amount of rear channel usage, no matter if you pick the 7.1 or 5.1 mixes, as it’s used to carry the original music and sound effects all throughout the film. There’s also a nice amount of bass presence used for the music which you’ll hear mostly via the subwoofer. The dialogue here, from the voice actors, is delivered primarily via the center channel speaker in a very distinct manner. I found the lossless mixes here to be very impressive, especially for a musical animated film.

38 minutes in I noticed that the rear channels were not only being used for music and sound effects but also some singing during a musical number. It felt pretty cool to have the whole film’s musical number not even halfway through grabbing your attention with effective surround use. Even voices seem to echo in the rear channels at times. It’s a very effective surround sound presentation here (via both lossless mixes). That all said, this earns itself a respectable 4.5 rating for audio quality. 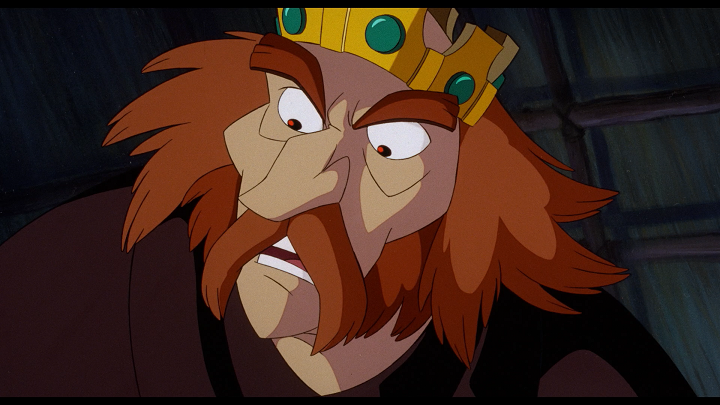 Bonus materials on this release are presented in both HD and SD (standard definition, 480p) video with Dolby Digital 2.0 Stereo sound. These include the following:

Overall here with the bonus materials, you get roughly 37 minutes of extras essentially – not counting the sing-alongs. There are both new and old materials here and each proves to be informative and entertaining. 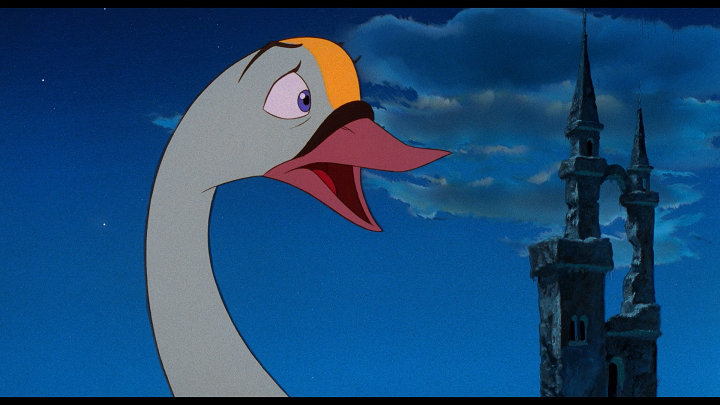 “The Swan Princess”, now celebrating its 25th anniversary here on Blu-ray, proved to be an enjoyable animated film. It was an animated film that has a backstory as to how it got made and there’s an obvious reason it looks similar and almost at the level of Disney animated feature films. The director previously directed films for Disney and left to start his own animation company. This was the first feature-length film that his company made.

The Blu-ray gets an impressive video and audio presentation film, worthy of the 25th anniversary. It’s nice to see one of the last, if not the last, hand-drawn cel-animated films get this nice of treatment. Finally, the bonus materials round things pretty well out with some new retrospective content, an old archival featurette and sing-alongs for the musical numbers in the film. It’s a family-friendly set of extras.