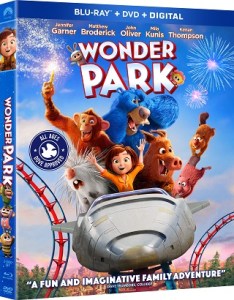 BUCKLE UP FOR AN EPIC ADVENTURE WHERE ANYTHING IS POSSIBLE!

With school out for the summer, WONDER PARK on Digital* and Blu-ray Combo Pack offers a wealth of entertainment and activities to get kids’ imaginations soaring with singing, drawing, and more!   The fun-filled bonus content gives viewers the chance to sing along with June and her friends, learn how to draw Boomer and the Wonder Chimps, watch Gus the Beaver yodel his heart out, make crazy noises like voiceover artists, and take a tour of Wonderland.

WONDER PARK is the story of a young girl named June with a big imagination who makes an incredible discovery—the amusement park of her dreams has come to life. Filled with the world’s wildest rides operated by fun-loving animals, the excitement never ends. But when trouble hits, June and her misfit team of furry friends begin an unforgettable journey to save the park. Action-packed and brimming with laughs, WONDER PARK is a ride the whole family will love.

The WONDER PARK Blu-ray Combo pack includes access to a Digital copy of the film.