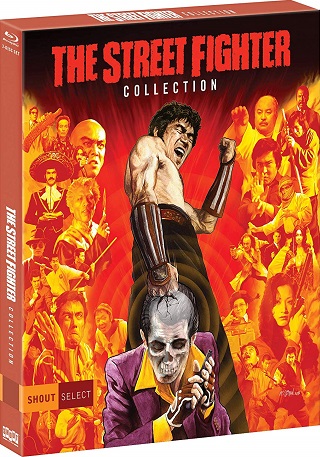 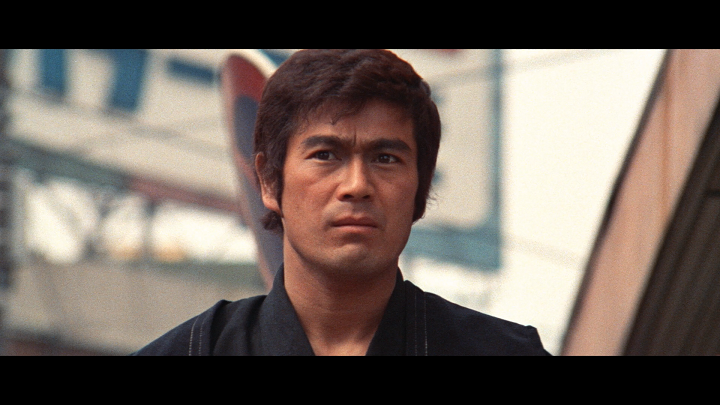 “Return of The Street Fighter“ from 1974 was a Japanese martial arts film directed by Shigehiro Ozawa. Ozawa most notably directed the first film in the franchise the very same year (“The Street Fighter“) and its sequels (like this one), and even a spin-off’s sequel – “Sister Street Fighter: Fifth Level Fist” (1976). The original screenplay was written by Hajjime Koiwa, based on the original story created by Kôji Takada. The film was originally released in April of 1974 in Japan by Toei Company and it would receive an English dubbed United States release in December of 1975 via New Line Cinema.

The film starred an actor and martial artist named Shin’ichi Chiba whose name would be changed in the United States the year before (for the first film) to Sonny Chiba. This second film, in a trilogy, has the master of karate/fighter for hire “Terry Tsurugi” (Chiba) back making his way to jail to take out a target. He’s been assigned to take out two people for the mob. Joining him this time around is a female companion (Yōko Ichiji) offering up some occasional attempts at comic relief. It all seems too familiar and just doesn’t come with as much cool action or gore that we came to expect from the original film. There’s one scene in particular that attempts to try to achieve that level of gore but instead comes across as downright campy.

The mafia (Yakuza) is behind a fake charity taking advantage of Asian martial arts schools to send the money back to the United States. That’s just a crazy plot, is it not? Only Sonny Chiba and his excellent fighting skills can save this movie from its own badly written screenplay’s lack of a believable or followable plot. A plot that pretty much just used a lot of the first film’s scenarios, scenes, and even brings back two characters from it. It just doesn’t work, as the story is very hard to follow and even if you can it’s not very impressive. Again, it’s all about the actual martial arts here and seeing Sonny Chiba kick ass all over again as this character. Lastly, be prepared to see a few actors reprising their roles from the first film and footage from that to also be used.

Film Fact: This originally received an X Rating from the MPPA during its United States theatrical run. What you get here on Blu-ray is the UNCUT version of the film which is UNRATED. 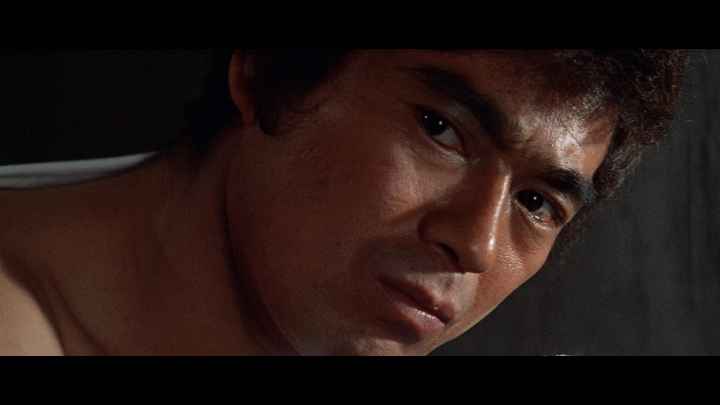 “Return of The Street Fighter” is presented in the 2.35:1 aspect ratio, just as it was shown during its theatrical releases. This was shot on 35mm film with cameras using the ActionScope type of cinematography according to IDMb.

This comes from two different sources (as stated before the film plays): the first source is a new 2K scan of the English language cut of the film and a previous HD master of the original Japanese version of the film. This new 2K scan was done by Warner’s MPI (Motion Picture Imaging) facility using the Lasergraphics Director scanner from an archival color reversal internegative. The film restoration efforts were done by Duplitech.

Some scenes here seem a whole lot better quality in comparison to the first film in the trilogy (set). However, it does have its share of rougher scenes, just like the first film because it also uses two sources (as discussed). The first sequel, much like the original film, looks impressive for a 1974 martial arts film and certainly looks the best it ever has here.

From here on out I’ll be using some screenshots for examples here to show some issues I came across in the presentation. First off, the color timing here between the two sources doesn’t always blend perfectly – as seen HERE and then HERE. There’s a very nice amount of film grain that has been preserved here in both the new 2K scan footage as well as with the Japanese HD mastered footage. The black and white footage from flashbacks to fights from the first film looks pretty good, with a nice amount of film grain visible (see HERE).

The only real downside of this being in HD is that you can clearly see wires used during a fight sequence involving one of the younger cast members – likely for safety purposes. The said scene only lasts 5 or 10 seconds but it’s pretty blatantly obvious now. Visual imperfections, just as expected, have been left in and can certainly be visible such as scratches, damage to the film print, and occasional specks of dirt. The black level never reaches being completely solid here but it manages to come close enough.

All and all, this first sequel offers a pretty solid video presentation, given the source material limitations. It is true that it just doesn’t seem as impressive as the first film visually in high definition. I think that this is because the HD inserts taken from the Japanese master seem to be a whole lot rougher here, for this film. There are a few occasional close-ups that prove to be somewhat impressive in terms of the amount of newfound detail. Still, it’s just not as impressive as the video quality found on the first film’s Blu-ray. 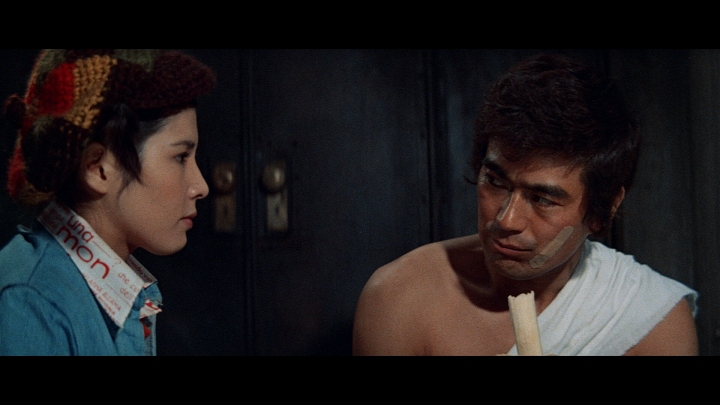 Audio here on this Blu-ray is presented in DTS-HD Master Audio 2.0 Mono in the original Japanese language as well as the original 1975 Theatrical English Dub. Both mixes sound good here, but just as with the first film you get a slightly cleaner presentation with the original Japanese language mix. Sure, you’ll have to read subtitles if you don’t speak Japanese but it’s just a better experience, in my opinion. I also still believe the sound effects are much more accurate on the Japanese track as well. The English dub here isn’t that bad and is worth giving a listen to if you’re not into reading subtitles or such.

The first real sound effects in the film are of a motorcycle speeding down a somewhat busy road (appearing to be the same shot used multiple times). The sound of the motorcycle and of the passing traffic a pretty convincing to just be in Mono. Dialogue is spot-on regardless if you’re listening to the English dubbed mix or the original Japanese language mix. The sound effects, especially during the fight scenes, can come across pretty effective.

The music here is presented in a solid manner, never once overwhelming either the dialogue or action (sound effects). It can even be a bit impressive at times, especially on the Japanese mix). For a martial arts film from this time period and made on this budget this doesn’t sound too bad at all. This release seems to do the film justice in terms of sound with the two lossless audio mixes to choose from. Shout! Factory has done a good job here with what source material they were given. NOTE: My rating is based primarily on the original (Japanese) language lossless mix. 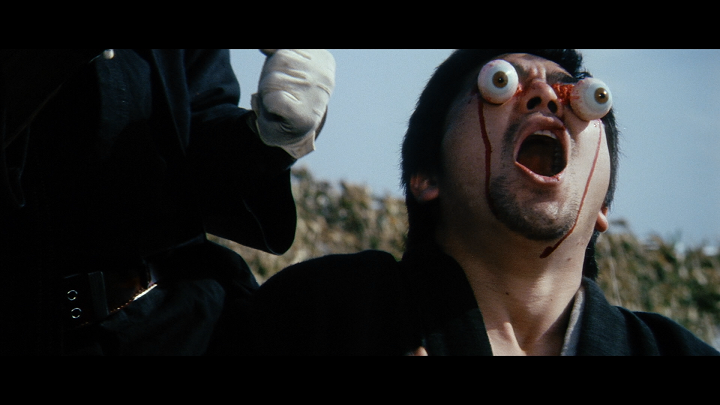 Bonus materials on this release are presented in HD (high definition) video with DTS-HD Master Audio 2.0 Stereo sound in both English and Japanese languages – noted accordingly below. Those in Japanese have forced English subtitles. Extras here include the following:

Overall the only extras here are pretty much just promotional materials. It’s still fun to look back on in a retrospective sense though. 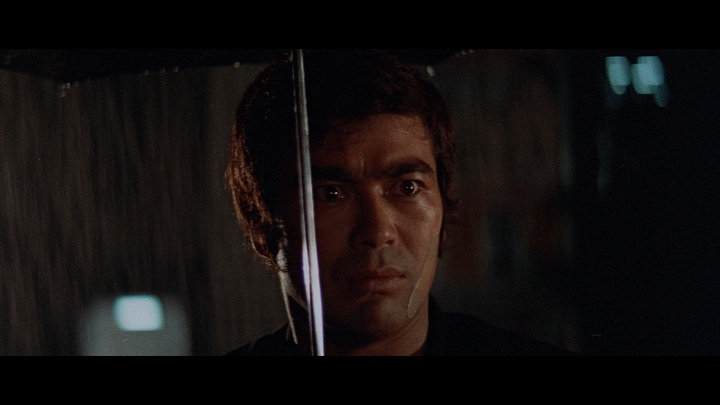 “Return of The Street Fighter” (available as part of “The Street Fighter Collection”) is a pretty ridiculous sequel, but Sonny Chiba (Shin’ichi Chiba) still manage to kick enough ass to somewhat save the film from itself. The film would spawn one more sequel: “The Street Fighter’s Last Revenge” which was also released in 1974 originally in Japan. The production company (Toei) responsible would also create a spin-off franchise with “Sister Street Fighter” (1974) the very same year that featuring this film’s star (Chiba) in a co-starring role.

The sequel comes here to Blu-ray in “The Street Fighter Collection” with a combination of source material that blends together for a solid visual high def presentation. The audio sounds a bit clearer now in a lossless mix. In my opinion, the Japanese mix is the best choice to opt for in terms of quality. In terms of bonus, you get the U.S. teaser & theatrical trailers, the original Japanese trailer, and a gallery of images (in HD). It’s alright for just a set of retro promotional materials and some pictures. It’s as simple as that in terms of extras but it comes will a good presentation in terms of video and audio quality.

Keep in mind this is just for the second film out of three films included in this set, so the ratings for those films may perhaps differ in their individual reviews.