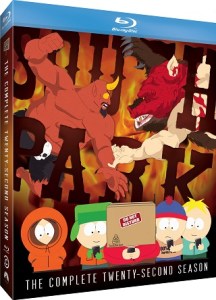 “‘South Park’ still hasn’t lost its fastball, and continues to be one of the most cheerfully irreverent shows on television”

Join Cartman, Kenny, Stan, and Kyle as they have a memorable Halloween, get super cereal with Al Gore, and try to win the top prize in the town’s bike parade in the enduringly popular series’ incredible 22nd season.

Own all 10 episodes from the latest season on either Blu-ray or DVD.  Each two-disc set also includes deleted scenes and mini-commentaries on all episodes by “South Park” creators Trey Parker and Matt Stone.  The Blu-ray set additionally includes #SocialCommentary on all episodes.