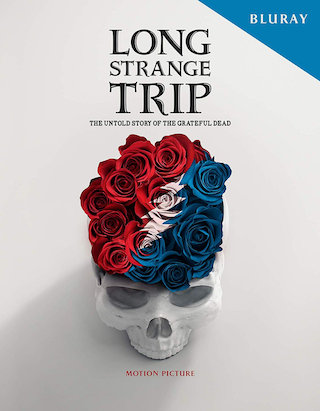 The 2017 Documentary “Long Strange Trip: The Untold Story of The Grateful Dead“ is coming to Blu-ray Disc on November 9th via Rhino Entertainment. The documentary, produced by Amazon Studios, has been available to stream on Amazon Prime Video for a good while (even in higher 4K resolution). Sadly, I hate to report that there is no sign that this will receive a 4K UHD Blu-ray release, yet it will receive a DVD release?! I cannot understand that logic one bit, but I digress, and now back to the news.

Tech specs for the release and any indication of bonus materials set to be included have not at all been detailed. The documentary is split up into 6 chapters and spans over 4 hours in length, proving to be a must-see for anyone who is a fan of The Grateful Dead (a Deadhead). This includes new interviews and archival interviews with the members of the band like Bob Weir, songwriter Robert Hunter, and countless others close to the group. You also get lots of never-before-seen live performance footage from concerts. This is one trip definitely worth the price of admission. Speaking of which, the title is now available for PRE-ORDER over at Amazon.