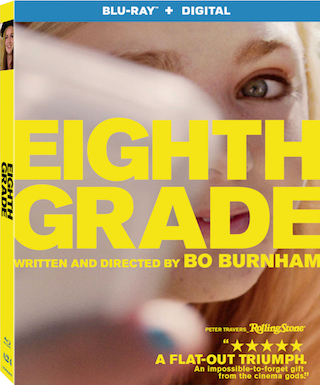 “Eighth Grade is a revelation.”

A RARE AND RESOUNDING RING OF TRUTH

Blu-ray™ and DVD on October 9 from Lionsgate

Thirteen-year-old Kayla endures the tidal wave of contemporary suburban adolescence as she makes her way through the last week of middle school — the end of her thus far disastrous eighth grade year — before she begins high school.

Take home Eighth Grade and go behind the scenes with never-before-seen deleted scenes, a music video, featurette, and audio commentary with Director Bo Burnham and Actress Elsie Fisher. The Eighth Grade Blu-ray™ and DVD will be available for the suggested retail price of $24.99 and $19.98, respectively.

Rating: R for language and some sexual material.