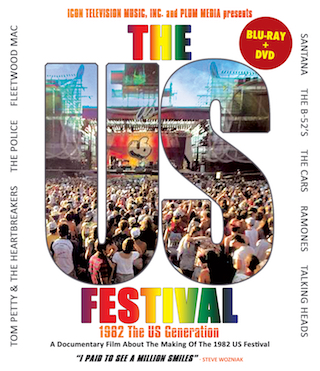 The Us Festival: 1982 The Us Generation

The Police, Tom Petty, Fleetwood Mac, Santana, The Cars, The B-52s, and more

The Us Generation: The Making Of the 1982 Us Festival is an in-depth look at one of the most influential music festivals of all time. The Us Generation is from award winning filmmaker and rockumentarian Glenn Aveni, who is also the film’s director. Co-Directed by Jay Cederholm and Produced by Bruce Gibb & Rich Schmig, the film blends rare concert footage and insightful interviews with both organizers and performers.

The film tells the story of the groundbreaking 1982 Us Festival–an epic three-day event featuring an eclectic and unprecedented lineup boasting some of the biggest names in music, performing live in front of over one million people at Glen Helen Regional Park in San Bernardino, CA. The Us Festival was the brainchild of Apple visionary Steve Wozniak, who wanted to create something that was a true celebration of Americana, cultivating positive vibes and building a deep sense of community through the power of technology and music.

The film is produced by Icon Television Music, Inc., Plum Media, and in association with Us Festival original founders Unuson Corporation.

EDITORIAL NOTE: This release comes on a non-traditional Tuesday release date. It will be available through certain online retailers like Amazon and Best Buy. It’s possible some physical retailers like Walmart may carry this title in store. We’ll keep an eye out, and keep you posted. If you see it out in stores yourself, be sure and let us know.